At long last I have managed to finish the Rainbow Word Clock!

Once again, this one was inspired by Doug and his creations http://www.instructables.com/id/The-Wordclock-Grew-Up/

I have a fixation with RGB LED’s at the moment and I wanted to do something a little different.
So, while it is still here (before my girlfriend nicks it!) I thought I would share the proccess with you. 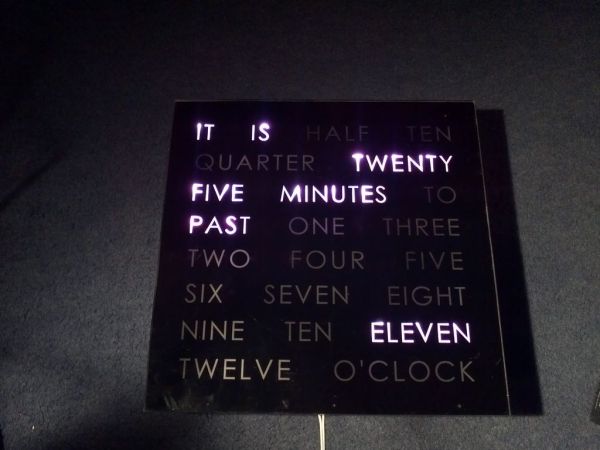 This is based on the Arduino ATmega328 with a slight redesign of the PCB to change the outputs from negative to positive and to add a ULN 2003 to handle the switching of the grounds.

I had a local company who do screen printing to make me two Word clock faces, one regular 300mm x 300mm and one custom 185mm x 205mm.
The smaller one is designed to be fitted into my cabinet just above the shelf, it has been sat in there for a number of months now happily telling me that I am late!

This one was also used as a test to do the first PCB, which turned out quite nice in the end.

The main part of the clock has not changed much from all of the others on this site.
I did make a few tweeks to try and improve the light spread without causing glare.

Key changes to the normal design are:

I used some plastic strips that I found at work and ripped them down to two sizes, a larger one for the outer frame and one smaller one for the internal shutters.

Once the grid is made I then covered it with reflective ducting tape, basically silver foil with a sticky back.

Placed the LED strips on the top and bottom of the cells so they are not glaring right at the word.

The LED strips were bought from eBay, 5M strips of RGB, but be careful though, some of the ones on sale say RGB but are actually three seporate LED’s, they don’t work half as good as the combined ones.

For the rainbow version I am switching the positive side of the LED strips instead of the negative, at first I thought I would need a HEF 4049 hex inverter to change the output but I managed to swap the ULN 2003 for the UDN2981 and bob is not only your uncle but you also end up with some empty parking spaces on your PCB. Then move one of the ULN2003 chips along to drive the 3 PWM outputs that generate random colours.There are a few pin changes from the original layout but the rest has not changed much from Doug’s original design.
I have also added a PDF of the wiring diagram in the ZIP file.There are 4 wires from each LED strip, a switched positive, Blue Negative, Red negative and Green Nagative.
I connected all of the Red wires into a bunch with one more so I could connect it to the ribbon cable, the same with Green and Blue. I simply soldered the bunch together and then covered with heat shrink.
There is a small strip of breadboard to connect the ribbon cable to the white switched positve for each cell. 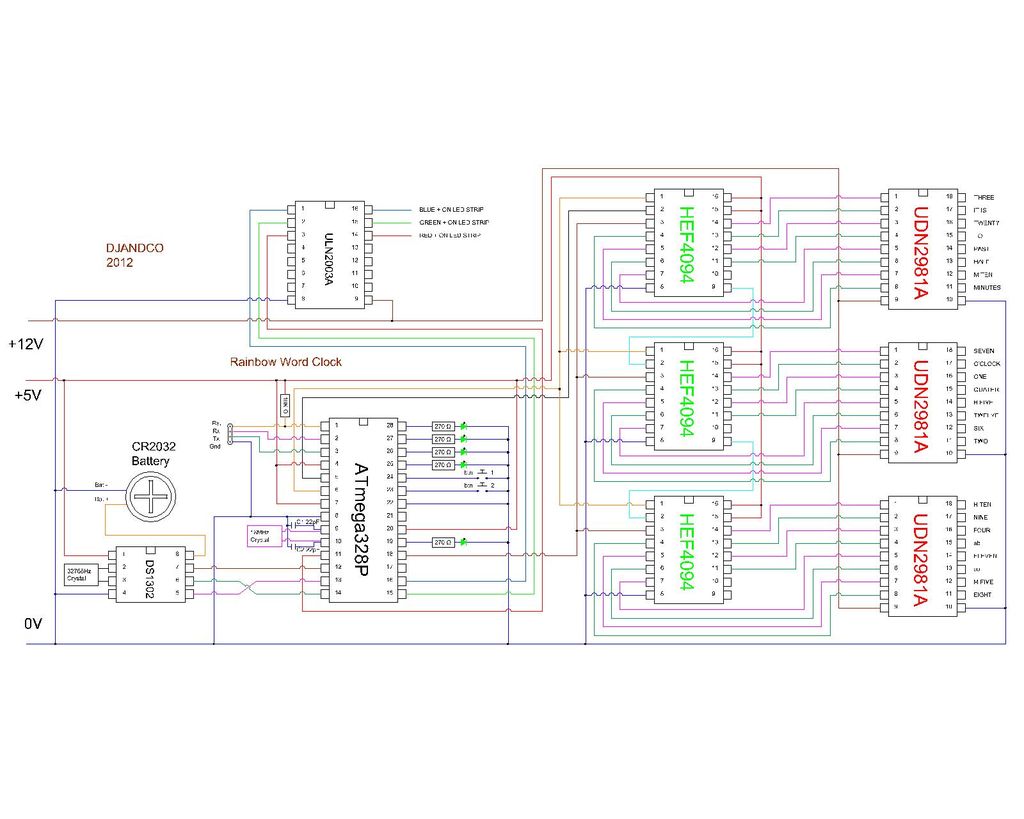 It is worth mapping the ribon cable out at this point with a 12V supply, make sure all of the LED’s work and note which wire does which cell.