Jeopardy style quiz games are favorites for creating excitement and educational instruction at the same time.  Teachers, summer camp counselors, and even industry educators find this type of game to help generate interest and involvement from the participants. 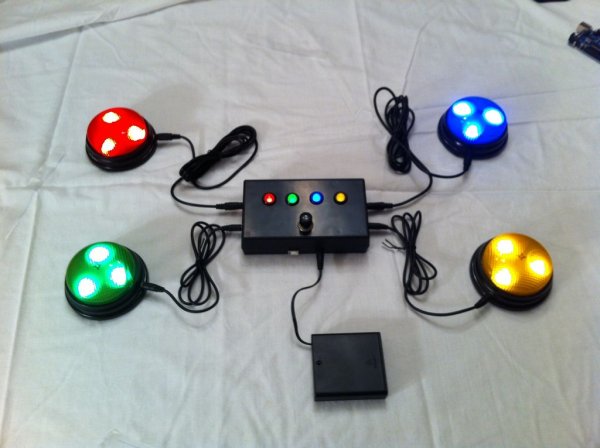 The idea behind the game is simple, but sometimes finding a device that will perform the “first to respond” lockout function can be problematic.  Here is YAQGC (Yet Another Quiz Game Controller 🙂 based on some pretty neat lighted buzzers and an Arduino put in to a project box.

The buzzers are modified to plug into a base unit and provide “button press” signals and accept an “activation” signal.

The control box houses the Arduino Uno, the reset button, and four LEDs.

While the button modifications are a little tedious, intermediate soldering skills and patience will produce a nice looking and fun to use Quiz Game Controller.

In addition to capturing the first to respond “winner”, the controller also captures 2nd, 3rd, and 4th place in order of button press.  The order is indicated on the control box LEDs.  Of course the beauty of having a programmable controller is tuning it to just the way you want it.  Other game modes are possible, including “Wheel of Fortune” modes, although this version of the Arduino program only implements the “Jeopardy” style game.

Background and instructions on www.projectnotions.com

Because there are 4 things we want to do (ground, button press, activate lights, activate sound) and we only have 3 wires, we have to combing two functions using one wire. We accomplish this by taking advantage that the logic on the button does it’s own management of the lights and sounds function. When the “activate” line goes high for about 20ms the button logic activates the light and sound. By connecting a compact relay to this same line we can control the sound in an independent way.

Here are the states we manage on the “activate” line.

–   Low – The button is off. If it was previously activated, it will turn itself off after about 2.5 to 3 seconds.
High Pulse – We drive the activate button high for 20ms, and then drive it low again. The button logic will turn on the lights and sound for 2.5 to 3 seconds, but because we connected the speaker through the relay, the relay will only stay on for 20ms. So, we don’t really hear any sound because the relay has disconnected the speaker from the circuit.-
–   High Solid – We drive the activate button high for about 2.5 seconds. The relay keeps the speaker connected to the circuit for the entire duration of the button’s “activation time.” and we both see the lights AND heard the sound.

The button schematic is below.

It is somewhat of a tight fit in the button and we chose a 2.5mm stereo phone jack for the connector to minimize the space required. The four main changes are: 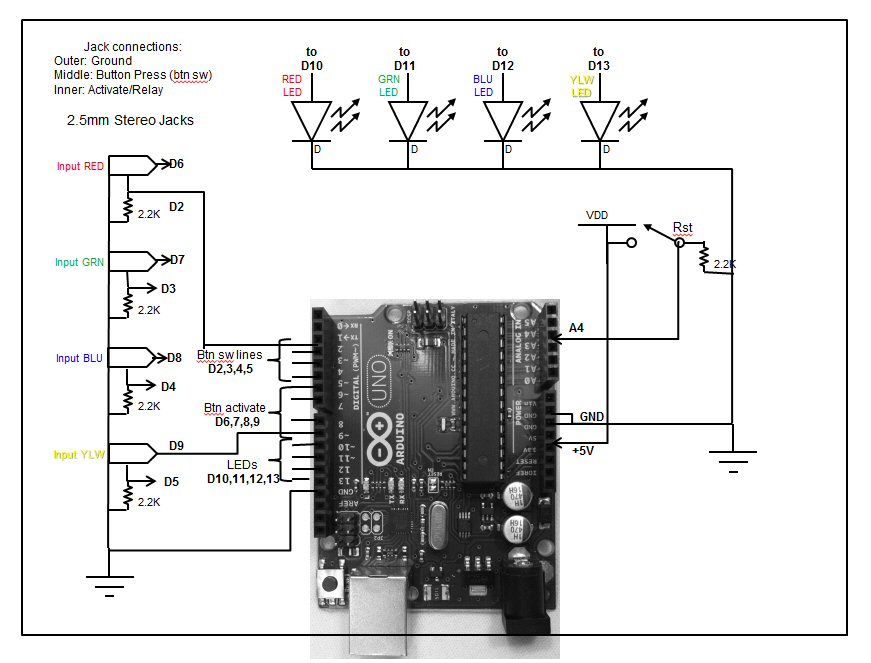 Cut the pc board trace to separate the “button press” signal from the “activation line.”
Drill a hole, countersink it, and mount the phone jack.
Mount the compact relay.
Cut and solder the necessary wires.