UPDATE 02/13/11 : Voting has started for the Sparkfun Microcontroller Contest. Please VOTE for me!

Irrigating crops with the exactly right amount of water is a tedious task, especially when you have to walk a long distance to the irrigation pump in the middle of the night to check whether any problem (fish getting stuck in the intake and as a result the irrigation motor burning or jamming!)  has occured. As I saw my uncles tired of doing the same, I felt there had to be some remote controlled solution to their problems.

I started to think about a system, which would:

1.  Detect jamming of the motor and immediately shut it down.
2.  Be cost effective.(Less than $150)
3.  Remotely turn on and off the irrigation motor.
4.  Send back a message to the operator, if an error occured.

And thus came the brainstorm to build the “SMS controlled Wireless Irrigation System” . I also wanted to submit this to the Sparkfun Microcontroller Contest , so it was all the more reason for me to go straight to building the prototype. 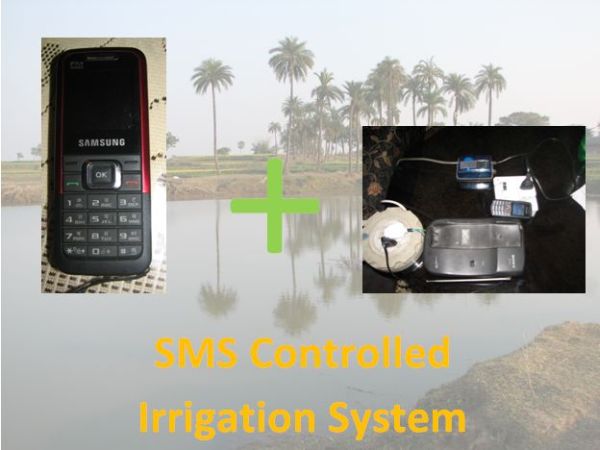 The prototype could do the following:

1.  Be remotely controlled via SMSs through a cellular GSM network.
2.  Send back ERROR messages to the operator, if the Miniature Circuit Breaker (MCB)  was tripped due to electrical faults or motor jamming.
3.  Control loads of up to 15 amps.

The fruits of my work is detailed in this ible.

P.S I suggest that you read through the entire Instructable before starting.

Step 1: Getting the Materials

For this project we need various cheap parts and you should be able to get these easily at any local Radio Shack. We only need a few extra parts which you might have to go to another shop. The bill should total at max. $100. You must think I’m joking but I’m not. At India, we get stuff even cheaper – Rs.1000 ($40 approx.) max.

WARNING: This project uses High Voltage AC mains voltage and could cause death or electrical shock, so I am not responsible for any damage you do to yourself or to others around you. Proceed at your own discretion and if you are NOT comfortable doing this part yourself, get it done by a qualified electrician.

This project uses a high voltage relay(30 Amps and 240v)to control the irrigation pump.The mains circuit is housed in a separate enclosure and consists of the Miniature Circuit Breaker, A wall socket and a resettable cartridge fuse (the ones where a button pops out).

You will have to wire up the mains line as shown in the below diagram, basically like this:

After connecting everything up, make sure to route the wires and put the entire setup in a separate junction box with a few ventilation holes drilled in the sides,with the MCB and wall socket showing on top.

The MCB state-detection sensor is basically a custom switch, which detects whether the MCB is in its tripped position or not. Accordingly the Arduino takes the steps to send the error SMS to the pump operator. 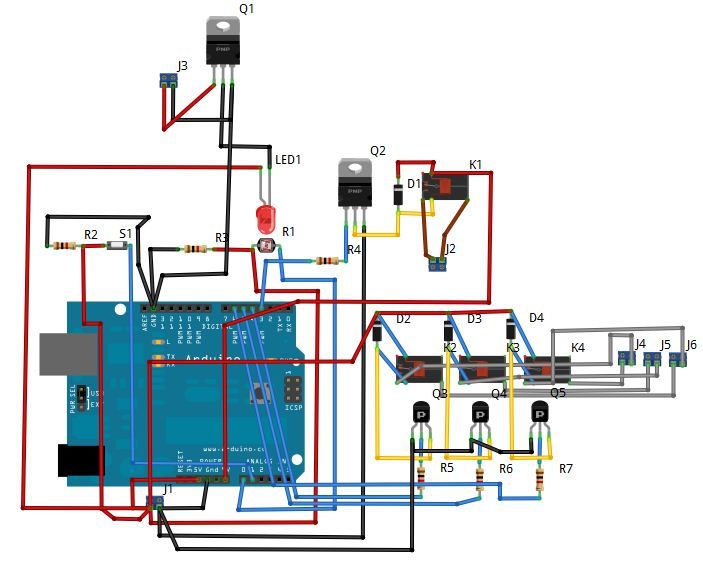 Attach one wire to Analog 2 on the Arduino , the other one to 5v on the Arduino, placing a 1K pullup resistor at the junction and attach the other leg of the resistor to the common GND on the Arduino. Step 5 shows this properly, in the form of a circuit diagram.(2nd  picture)