How to Select a Resistor

When I was working on the next version of Common Parts Library, I realized that it would be helpful to explain why you might pick one type of passive component over another. We started off by writing “How to Select a Capacitor” last month, and are following it up with a close look at resistors this month. 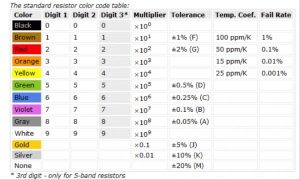 In this blog, we will explain all the different types of resistors, their merits and demerits, and popular applications. We have included some recommendations for commonly used resistor series with high supply chain availability from the Common Parts Library and Seeed Studio’s Open Parts Library, and have linked to pre-created search on Octopart.


Let’s dive into the world of resistors:

Resistors are two-terminal components used for limiting current, voltage division, and timing applications. Resistors complement ‘active’ components like op-amps, micro-controllers, or integrated circuits for variety of operations like biasing, filtering, and pulling up I/O lines. Variable resistors can be used to change the properties of a circuit. Current sensing resistors are  used to measure the current in a circuit. The unit of resistance is Ohms (Ω).

TYPES There are several different types of resistors which differ by power rating, size, performance, and cost. Below are some of the common resistor types: chip SMD resistors, through-hole resistors, wirewound resistors, current sense resistors, thermistors, and potentiometers. We’ve also included their characteristics, applications, package information as well as info on part selection.

Chip surface-mount resistors provide a size advantage over through-hole resistors, so they are great for printed circuit boards (PCBs). Some of their common applications are pull-up/pull-down operations to ensure a signal is at valid logic level when external devices are removed, voltage divisions, current limiting, and filtering signals at certain frequencies in high-pass/low-pass/band-pass filters. You can use 0Ω resistors as jumpers to disable a sub-section of a circuit.

READ  Maintenance-free lead batteries Panasonic will surprise by their lifetime

Read more: How to Select a Resistor

How to Subscribe to the Arduino Chrome App for Education

An overview of the subscription process for Arduino Create Chrome App for Education. Story About This step-by step guide is...