Maker Alessandro Grossi sent us this great DIY build for a 3D scanner built using a laser, a DSLR, and an Arduino controller. Allesandro is a Mechanical Engineer, holding a Ph.D. in product design. His day job involves helping designers and manufacturing firms develop and optimize products by means of FEM analisys and Computational fluid dynamics. This is just what he does for fun. You can read the project and more on his own site, metaingegneria.com. 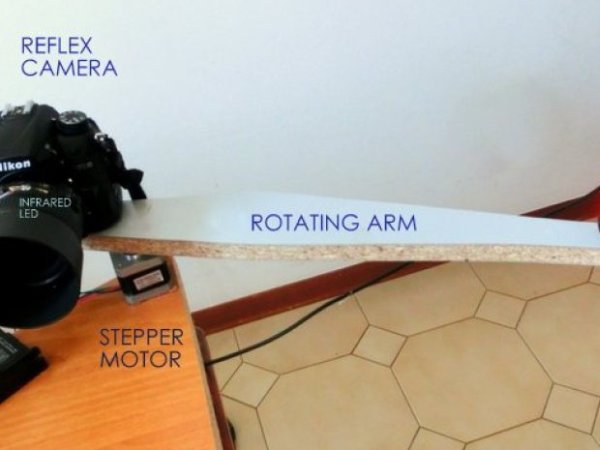 A line laser is a laser equipped with a cylindrical lens, in this case I used a red laser, but  other colors can be used, like green or blue. The lens opens the beam shaping it into a plane. The one I used in this experiment is characterized by a nominal power of 100mW (not up to standard in Italy, I think the max allowed power is 5mW) but  the beam does not remain focused in a single ray, it  is extended in a plane, so the intensity quickly drops below dangerous levels.

The principle behind this scanner is the typical of a line scanner. A laser beam intercepts the object to be measured and a camera, positioned at a known angle and distance shoots a series of images. With some trigonometry considerations  and optic laws it is relatively easy to reconstruct the Zeta dimension, the measurement of the distance between the object and the camera.

Commercial systems based on this principle, named line scanner or profilometers, are used in industries and are typically characterized by a high frame rate (even 200 or more frames per second) and a strength suitable for industrial uses. An industrial profilometer price ranges from a few thousand Euros to several tens of thousands of Euros. The cost of the components for the system I propose here does not exceed 100/150 €, if you already have an SLR.

General Description HMC914LP4E is a limiting amplifier designed to support data transmission rates up to 12.5 Gbps. The amplifier can...