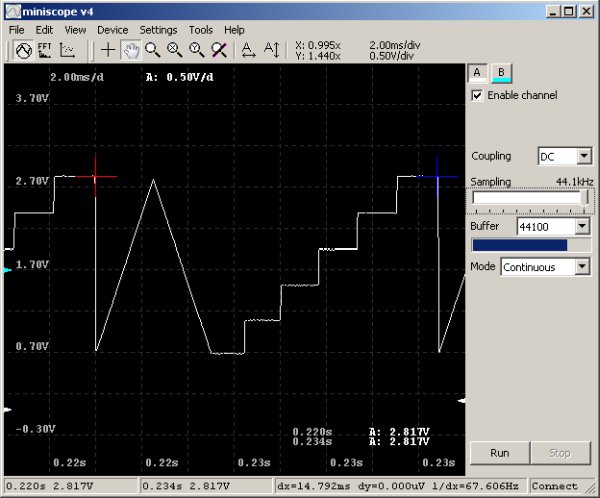 This USB sound card that presents itself as C-Media is one of the cheapest sound cards available with price $1.1-$2 depending on vendor. 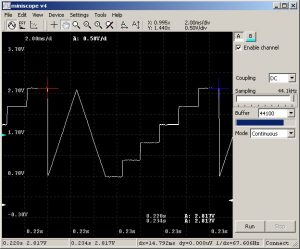 Judging by the descriptors chip inside is identical as in previously described “C-Media” sound card version without any control keys.

Unlike the previous “C-Media” USB sound card I’ve tested and similar card from this thread it was easy to find point where DC signal component is not blocked:

Beware that with this simple setup oscilloscope input would be equivalent to 2V voltage source with 250k resistance in series. It may be not suitable for circuits with e.g. weak pull-ups. Input buffer would fix it but I’m not considering it economically justified as base STM32F103 board that doesn’t have this problem (and is usable with miniscope v2c firmware/DLL) costs ~$4.

Other approach to building input stage: http://www.epanorama.net/newepa/2012/05/08/usb-soundcard-to-digital-storage-oscilloscope/ (I haven’t tested it yet but it’s simple and looks promising).

Don’t judge a book by its cover (thanks to Daniel Montalvo) – it looks like othes type of sound card is sharing almost the same package:

Introduction I've been fascinated with joule thief circuits since I made my first one.  It's amazing what all you can...