The CatBot is an autonomous laser toy for your cat. You may say “But Joe, isn’t the laser pointer the best toy for the lazy cat owner?” I’d have to say no, the CatBot takes one step further. 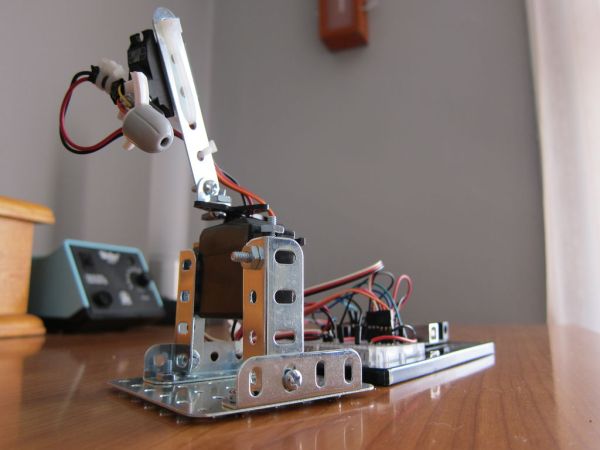 Using two servos, an Arduino and a cheap $3 laser you can provide your cat with endless fun.

I was buying pet food and saw a $3 laser from PetCo. I thought the cat might like it. I was wrong. The cat became obsessed. Constantly grabbing the toy off of the coffee table. But she only wants to play for 1 minute then sit and stare at it. So you think, OK I guess she is bored. You put it down….

And she’s back pawing at it.

The CatBot is the solution.

The laser pops open with a screw driver. You can see it used 2×1.5v batteries. But it actually runs better at 4.5v.

The laser had to be cut up to fit on the servo arm. I drilled a hole in the center so I could mount it to the servo arm as well.

I used a hodgepodge of these cool mechano/erector set pieces from Hillman. They can be found in the screw/small parts drawers at Lowes.

Step 6: Wire up the Arduino

For the Arduino wiring, attach pins 8 & 9 to the servos.
Attach the laser to 5v, but 470 ohm resistor inline before the laser.

This project is a 14W Stereo Audio Amplifier based on LM4730 IC. Description 14W Stereo audio power amplifier build around...