This Lazy Old Geek decided to add a rain gauge to it even though we don’t get much rain in the high desert. Most digital rain gauges are based on something called a tipping bucket. Here is a good diagram complements of:
http://park18.wakwak.com/~weather/archive/RainGauge.htm

There are actually a lot of rain gauges for sale. Amazon.com has some tipping buckets for around $20. But I’m a Geek where’s the challenge in that, so I decided to build my own. 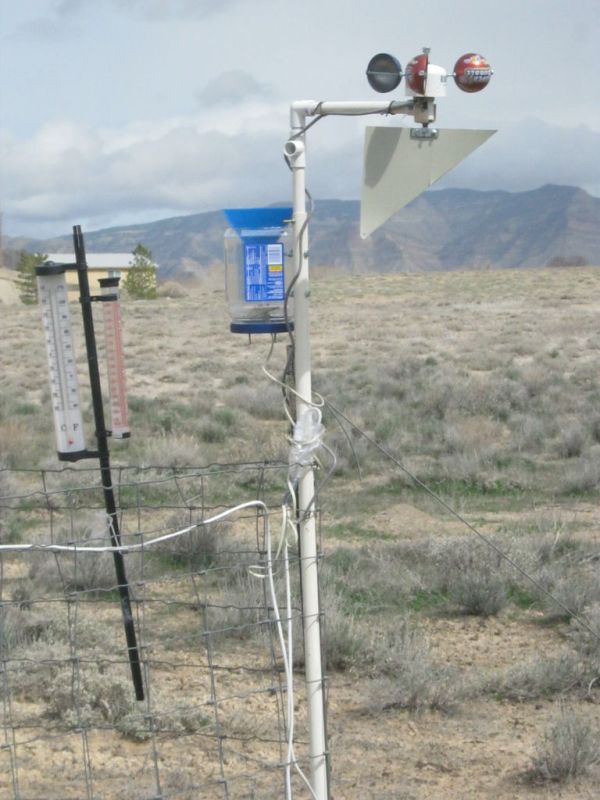 Any USB Arduino should work but it is easier to wire it up to an Arduino shield so the clone would have to be shield compatible. There are some good deals on ebay for Arduino Duemilanove 2009 for about $18.

The syringe is actually a cattle syringe for veterinarian use. I am a vet, close enough. Actually, this worked pretty good for calibrating my rain gauge.

Problem: How to design a tipping bucket rain gauge.
Solution: So I did some research on tipping buckets. How they work is that the funnel is over one of the buckets. Rain drips into the funnel and into one of the buckets. After a certain amount of water, the weight of the water tips the bucket so the other bucket is under the funnel and the reed switch is triggered and sends a count to the circuitry. As the rain continues, the other bucket fills up and tips it the other way again triggering the reed switch.
To make my tipping bucket, I took a piece of the aluminum ‘NoTrespassing’ sign, I used for my weather vane. I marked a rectangular piece 3” x 2.25” as shown in the diagram. I cut it with a pair of scissors and folded up the sides. I happened to have a piece of ¾” aluminum, I used to shape the trough and bent the sides up. Then I trimmed the sides so they were triangles. I cut another aluminum piece ¾” square, rounded the bottom corners and hot glued it in the middle so that you have two ‘buckets.’ See first picture.

Warning: If you are a horrible hot-gluer like I am, it might leak. Mine did. Pour a little water in the side tilted up and see if it leaks out the other side. If it does, heat up the joints and/or add more hot glue. You can see from my pictures what a terrible job I did but it stopped leaking.

The next picture looks a little weird. I wanted to use nylon spacers for the pivot point but my local Ace hardware didn’t have any. They did have these #8 nylon washers that are about 1/8” thick so I bought them. I wanted the spacers to stick out away from the sides of the tipping bucket so I taped another scrap of the sign to the tipping bucket then I tapped the washer so that it was flat with the scrap. The adhesive tape looks pretty weird in this picture. Then I hot glued the washer to the bottom of the bucket assembly and did the same to the other side.

The next picture shows the results. Again you can see my poor hot-glue skills and yes, it’s a little crooked but it worked okay.

Problem: So my local Ace hardware had some angle brackets but they were a bit expensive and I had no idea what size I would need.

Solution: So I decided to make my own. Perusing the store I found these ¾” pipe straps. Actually, I found some in plumbing and electrical but electrical was a lot cheaper. So I took the strap and flattened it out in my vise. Then I bent a right angle with about 1 1/8” sticking up (see picture). In the bottom of the strap about ½” from the angle, I drilled 5/32” hole for #8 hardware. This was rather specific in that it was close to the center of where the tipping buckets would be. Then I drilled another 5/32” hole for a second bolt. I also had to trim off some of the bracket with tin snips so it would fit in the nut jar lid.

Problem: Now I started looking around for something to put the rain gauge in. My first thought was plastic plant pots. But thinking ahead (for a change) I thought I’d want something transparent so I could get it lined up and make sure it was working correctly. 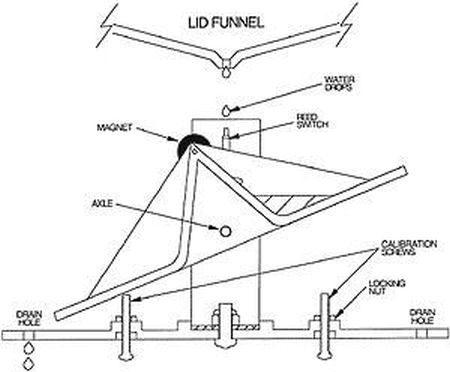 Solution: Well, I decided on an empty plastic 2lb 6oz nut jar. Now most people would think, take the lid off and build the tipping bucket inside the jar. With my sometimes inverted logic, I decided to build the bucket in the lid and cut a hole for the funnel in the bottom of the jar.

So that is why I drilled the angle strap for the center of the tipping bucket. I drilled a hole in the center of the lid (conveniently, it was dimpled there anyway), Then with a screw holding it, I drilled the second mounting hole in the lid. So with the funnel ‘centered’ in the jar, the tipping bucket should be right under it. Now I also drilled two holes about 1” from the center at right angles to the bracket for ‘calibration’ screws underneath the tipping buckets. I also drilled four big holes to allow the water to drain off. I think all of the parts, so far, are galvanized so should not be subject to rust or water damage.

The funnel I selected is 5.5” diameter. One of the traditional rain gauge funnels is 8” but this one fit my jar better. I forgot to take a picture before I put it in the jar but I wrapped a piece of plasticized paper (plastic on one side) so that the bottom of the funnel is smaller and easier to align over the tipping buckets.

I used a Dremel-clone to cut the opening for the funnel. Conveniently, there was a circular indentation in the bottom of the jar.

Arduino Python Twitter (Windows) In this instructable we'll modify my simpleTweet_00 and rewrite the Processing code with Python. You can...