In this instructable we’ll modify my simpleTweet_00 and rewrite the Processing code with Python. You can expect an ignorant walkthrough by an illiterate noob, but maybe that’s just what you’re looking for.

Before you begin:
If you need help installing Python, navigating Windows from the Command Prompt, or installing packages, then take a look at my instructable How to install Python packages on Windows 7 . It’s a quick and dirty walkthrough but it should get you going asap.

And because simpleTweet_00 already explains the concept, I’ll be brief:  Arduino sends a message via Serial to Python; Python sends a tweet. The idea here is to create a simple Arduino Python Twitter communication. For beginners.

The idea for this project was to develop generic code allowing you to automatically generate tweets based on input to your Arduino. This example uses a magnetic reed switch, which is your basic on / off switch. You can use this code as is for any two-state switch or modify it for more diversity.

We attach the magnetic reed sensor to my office door and door-frame. A wire runs from the magReed sensor to a pin in the Arduino circuit. Arduino watches that pin’s status, HIGH or LOW, and when the status changes from one to the other Arduino reports on that change through Serial(). The Python sketch picks up the Serial() call and checks to see if the current state is the same as the last one posted to Twitter. If the two states are the same then it will not post, but if the new state is different from the previous state, then we’re in business.

This Arduino script differs from the original simpleTweet_00 Arduino script  in the use of Serial. Originally, we used Serial.write();  but that didn’t seem to work so well here. I decided I wanted to send human-readable information through Serial, so I had to change the Arduino code from Serial.write() to Serial.println(), and not just that, but, to make a long story short, it seems to work best when inside the if() statement, like this:
if (Serial.available()<=0) Serial.println(“Closed door”);

If you don’t know How to install Python Packages on Windows 7 then you *really * need to follow that link. It’s my instructable. It’s a set of directions, not explanations. You’ll need to do that before you can use this code here.

Refer to my How to install Python Packages on Windows 7 instructable if you need help installing these.

To run a python script, open it in IDLE and hit “Run > Run Module”.
To learn about YOUR TWITTER KEY, goto the next step.

You’ve probably already got one (or twelve) but for the absolute noob, take heart. It’s easy.
Goto twitter.com and set up an account. Make it a public account, that way if you ever want your friends to look at it they don’t have to go through a whole bunch of hooey to get there. And don’t post personal stuff like “Out of town, leaving diamonds on back porch.”

You’ll see people using the “@” and “#” symbols a lot. Put @ before a username and # before a concept. For example, if you post the following tweet “I enjoyed the @msg_box simpleTweet_00 on @instructables #goodtimes” then that tweet will get sent to my feed (and to instructables’s feed too) and it’ll get added to a cache of all posts that have ever used the phrase “#goodtimes.” There’s more, but it’s not within the scope of this lesson. Play with it. You’ll figure it out. 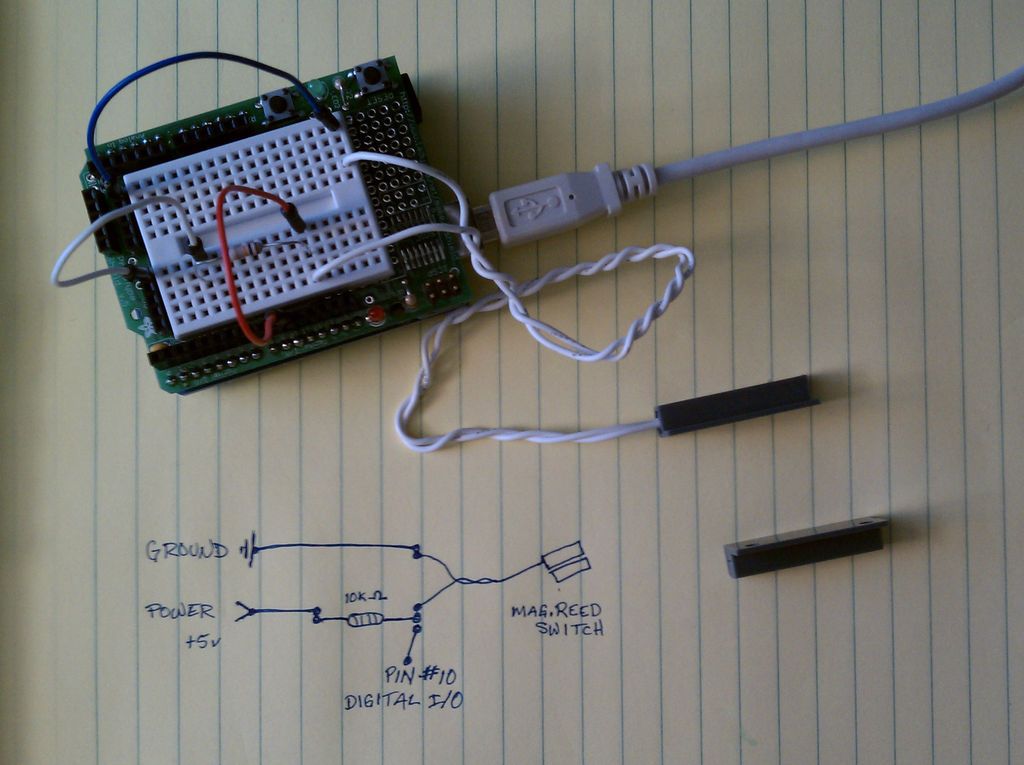 What does that even mean? Relax. Think of it this way: you’re creating a set of special high-tech usernames and passwords so the stuff you make can access Twitter. It’s like Twitter is this big castle with a front door for all the human guests and a back door for all the automated service personnel. These high-tech usernames and passwords are called OAuth. OAuth lets your device access Twitter through the service entrance.

Having already created my Twitter account @msg_box I then went here https://dev.twitter.com/apps/new to get my OAuth password info. Review the three attached images of the forms .

Breadboard vs Circuit Board
The fasted way to hack this project together is with a breadboard (image). The breadboard, or solderless breadboard, is perfect for prototyping, for proving that your circuit works as you expect it to. That’s because the breadboard allows you to attach and disconnect wires without any forethought or commitment or difficulty. With a breadboard, if your circuit does not perform the way you thought it would, then you can take it apart and reassemble it as many times as you like until you’ve got it right. After you’ve proven the concept and you know your circuit is right, then it’s a good idea to solder together a real circuit board. I’m a big fan of soldering your own circuit boards. It’s fun and easy and adds a special element of ownership to a project. If you want to reproduce lots of copies of your circuit, then you should consider printed circuits. Printed Circuits are the next step after Circuit Boards and are a great way to share your project with others, especially when it’s a complicated circuit. You can order printed circuits or make them on your own.