Hey everyone, I finally finished my touch panel for my bedroom wall and am here to show you how i made it. Unfortunately its not installed in my wall yet as I might be moving and don’t want to make anymore holes in my walls, but its coming with me and has already proven itself very useful in the state it is in. 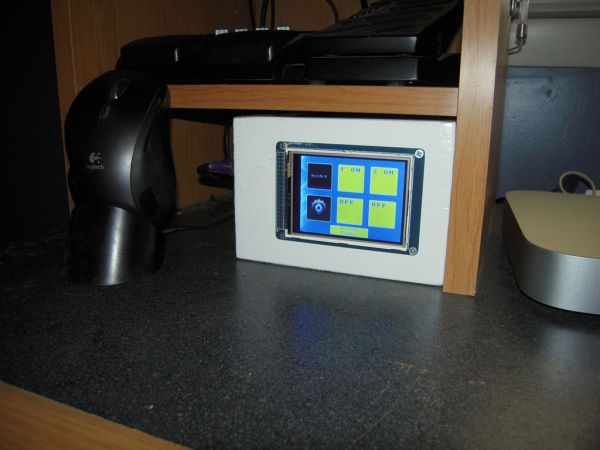 The build was not too difficult so I won’t go into that much detail.

RF – wall outlet transmitter
i used 4 x 2n3904 transistors to simulate pressing the buttons for the RF transmitter. The remote still works as normal, just has a hole in the back with some wires now. In addition to running a ground wire from the RF transmitter i also added a kill switch to the battery. They are a pain to order online (12v, 23amp battery) and they don’t last that long.

Netduino
The netduino has 5 wires connecting the digital pins (out) to the arduino’s analog pins (in) to simply trigger 4 of the buttons on the RF transmitter as well as the TV power toggle by reading in the voltage.

Arduino Mega with touch screen
Besides the 5 pins in the analog from the netduino, I wired in 6 wires out, 4 to trigger the RF transmitter’s buttons, 1 for a ground, and another for the infrared led. Bolted that sucker to the front of this nice wooden box and called it done 🙂 The box will be behind a wall so only the touch screen will show anyway. 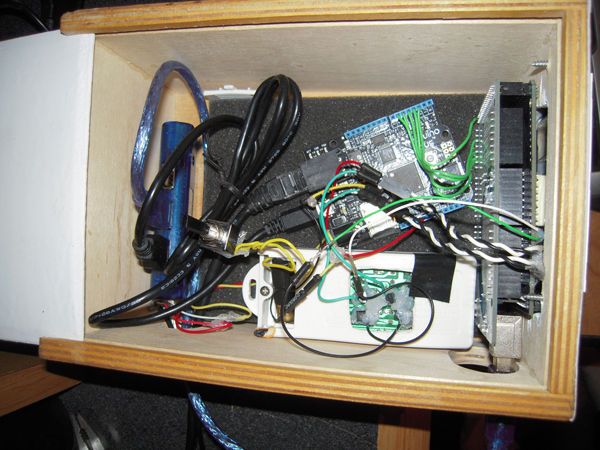 Three wires poke out of the box to hook everything up, a USB cable for power, an ethernet cable, and the IR led (which will be installed higher above the device).

Here’s a quick overview of the menu:

Main Menu (1st image)
From here you can choose between the “TV” menu, the “Settings” menu or toggle the power of my two wall outlets. The network toggle is just to prevent errors when the netduino powers on. Plus it keeps my friends from messing with my room.

TV Menu (2nd image)
One of the initial reasons for this touch screen was to power on/off my TV when leaving and entering the room, i plan on placing the screen above my light switch so when I am rushing to leave i don’t have to search for the remote.