I came across Plama2002’s “Emergency Party Button” build a while back and wanted something similar for my bar. I also had an old USAF B-8 stick grip from an A-10A that I picked up in my previous life. I figured instead of just being a conversation piece, I could put it to good use as a remote control for my AV system. What I came up with is a master control box that:

– Controls the overhead lighting in the bar and the components of the Emergency Party System.

It uses two Arduinos: one for switching and IR transmission, and one to wirelessly control the X10 devices.

This build is not really that difficult as both the Arduino and X10 applications in this project are really pretty simple. You just need to figure out exactly what you want yours to do and adapt it. Since I’m writing this ex post facto I’ll try to make up for the lack of step-by-step photos with thorough explanations. Sorry I don’t have the circuitry sketched out but there’s not much to it – we’re mostly just hooking up buttons with pulldown resistors, just like in the Arduino tutorials. There are a few slightly more complicated things going on but I’ll be sure to explain them as we proceed! 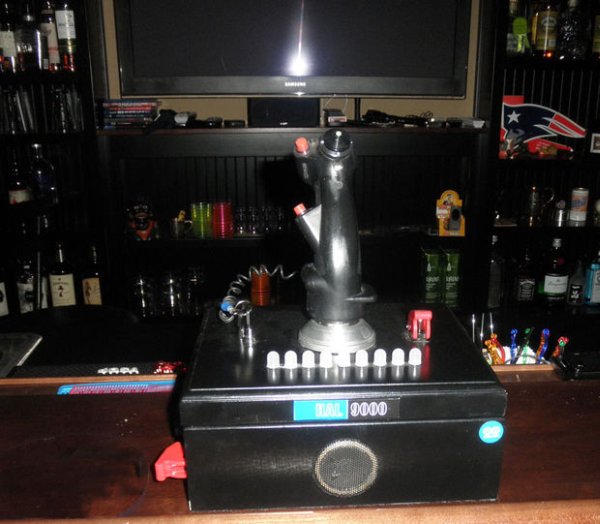 This build is really a few builds within a build, and uses mostly optional components which you can choose to incorporate or not.

– A project box, cigar box or something big enough to fit all the components into. I used a cheap, old cigar humidor.

– B-8 stick grip or similar control interface. It’s up to you what you use – the interface could be as simple as a cheap array of switches or buttons

– 2 Arduinos (I used Uno’s), one to run the IR remote control stuff and one to run the X10 stuff. You may be able to use just one if you know what you’re doing. This was my first real Arduino project and I didn’t :-).I also used protoshields to make these circuits permanent, but breadboarding will do!

-Switches. I used two DC toggle switches with ‘missile guards’ and a cheap Chinese key switch for effect. Since this is a custom build to your own preferences, use whatever you like!

For the Arduino remote control:

-IR remote control circuit to capture IR signals from your remote and decode them. See here

For the Party Button

– Old female serial plug that you can tear apart

Light effects for the box:

– LED’s. I used a couple of LED arrays I found online that run off 12v DC and an LED ‘cyclon’ kit I had lying around that will run off 3v from the arduino. You’ll need IR LEDs too, and couple of regular ones.

Sound FX for the box:

-A simple siren kit or something similar. I used a cheap ‘Red Alert’ circuit using 555 timers
– An LM386 amplifier circuit or similar, if desired. I wanted the alarm to be load so I used the amp.
-Speaker

I know there is a more efficient way to power the whole thing, but I built it in stages and as I got each part of it running, I didn’t feel like taking the time to re-engineer the power system. I could probably run the whole thing off of the 12v li-po pack but I’m too lazy to figure out how to do it. Plus I had a bunch of rechargeable 14500 and 10440’s (AA and AAA size li-ions batteries) in stock and there’s plenty of room inside the box, so space was not a problem.