This one is an interesting one, it’s something we’ve been looking at for a while and figuring out how to solve it. We have sets of speakers and projectors and the users keep losing the remotes, or misplaced/stolen. Usually this wouldn’t be a problem, we’ll just contact the supplier or manufacturer and order replacements. Except we can’t any more. 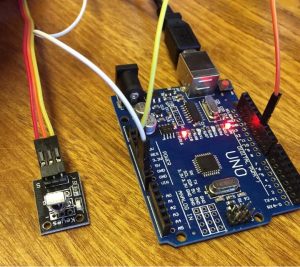 We have a set of Vision AV-1000 wall mounted active speakers, connected to an EPSON projector. Projector remotes are easy to come by, but the AV-1000 remote is no longer manufactured. The speakers do not have any manual controls for the input selection, bass/treble etc. only a volume control on the back.

We decided to make our own speaker remotes, as cheaply as possible. We decided on the following components:

The idea is simple, we capture the IR signal from a remaining speaker remote and record the commands that get transmitted. We did this by connecting up our IR Receiver to the Arduino, the receiver has 3 pins and from left to right GND, +5V, SIGNAL and using the Arduino IRRemote library. Run the Examples > IRRemote > IRrecvDumpv2 example. (see image below with the IR Receiver connected to a Arduino Uno (for prototyping, you can use the Arduino nano, but you’ll have to upload/reset the sketches when testing)

If this is running correctly, point the speaker remote at the receiver and press a button – When the IRReceiver gets any data it will flash with the on board red LED, so you know it’s working. Open the Arduino serial monitor and you should see an output of the data it has received. (see image below)

Luckily for us, the protocol used by the speaker remote has been identified as the NEC protocol, 32 bits. The IRRemote library has built-in functions to re-transmit this data. Now all we need to do is go through the speaker remote and recording the code of each button. (in the table below)