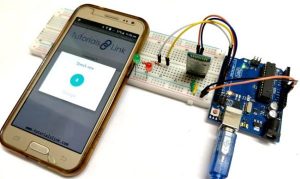 Bluetooth can operate in the following two modes:


In Command Mode we will be able to configure the Bluetooth properties like the name of the Bluetooth signal, its password, the operating baud rate etc. The Operating Mode is the one in which we will be able to send and receive data between the PIC Microcontroller and the Bluetooth module. Hence in this tutorial we will be toying only with the Operating Mode. The Command mode will be left to the default settings. The Device name will be HC-05 (I am using HC-06) and the password will be 0000 or 1234 and most importantly the default baud rate for all Bluetooth modules will be 9600.

The module works on 5V supply and the signal pins operate on 3.3V, hence a 3.3V regulator is present in the module itself. Hence we need not worry about it. Out of the six pins only four will be used in the Operating mode. The pin connection table is shown below

Check our other projects to learn more about Bluetooth module HC-05 with other microcontrollers:

Circuit diagram for this Voice Controlled Lights is given below, while uploading the code in the Arduino UNO disconnect the Rx and Tx pins and connect again after the code is uploaded.

The complete Arduino code for Voice controlled LEDs is given at the end. Here we are explaining few parts of code.

Here, in the below code we are defining the pins for Rx and Tx.

Now, set pin 2nd and 3rd of the Arduino as output.

In void loop function, Arduino will be checking the incoming values all the time and controls the LEDs as per the voice command. Arduino will turn on or off the LED according to the given Voice command. We are saving all the received command in variable “Value” 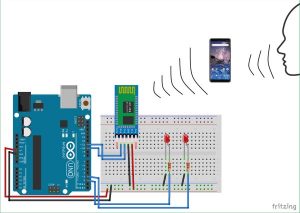 If the value is “all LED turn on” then both the LEDs turns ON, like this we have coded other voice commands for turning on or off the individual LED. Check the complete working and demonstration video later in this article.

This one is an interesting one, it’s something we’ve been looking at for a while and figuring out how to...