My name is Ben Brandt, and I run a YouTube channel as a hobby to share my various DIY projects (like this one) as well as woodworking, metal work, and making things in general. 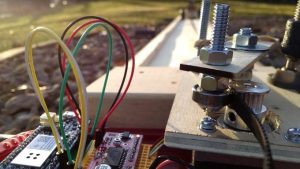 In my quest to make better video, I wanted to be able to make long sliding/panning shots. You can buy camera sliders, tracks, and dollies (or make them in my case), but you usually need somebody to physically move the camera. As a one-man operation, this is difficult if I want to be in the video. Also, I want to do some long, moving/panning time-lapse video, but I didn’t have a good way to move the camera at a very slow and consistent speed. There are motorized camera dollies available, but as an amateur they’re far out of my budget.

This is where my project (what I’m calling the Video Tether) comes in.

The timing belt and pulley work well because the belt doesn’t stretch (much) and we know the precise spacing of the teeth. This is the same kind of hardware used on 3D printers and CNC based machines.

Typically on a device like this the belt is looped around two fixed pulleys, but that limits the overall length of your track system. With this configuration, you can adjust the length of your belt and track however you want, and you can connect it to almost any kind of camera slider system.

For my setup, I got a 15-foot long length of belt on eBay along with some pulleys. The stepper motor was salvaged from some old electronics (I don’t remember what). The shaft is the right size for the pulley, and it’s a strong little motor. 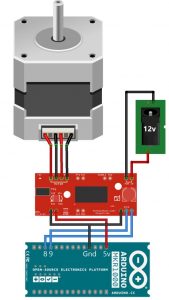 Use Alexa to tell your door sign what message to display. Things used in this project Hardware components Arduino MKR1000...