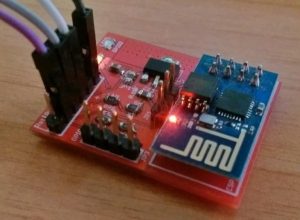 Now, why would you want to do all of that? I would suggest only if you happen to have lots of ESP-01 units lying around – and I’ll bet quiet a lot of you do. As for the Sonoffs – well, put it this way, I just ordered another 10 chips!

I stopped using the ESP-01 a while ago because the standard 4Mb (512K) of FLASH was simply no longer good enough. Richard of RBOOT fame set me using using his RBOOT program so I could easily flash my home control code (see Home Control 2016 and Blowing the Home Control 2016 Code). Partly because I keep adding new stuff and partly because of the size of the Espressif SDK, Although my code will still run in an ESP-01, it certainly won’t OTA (remote over the air programming).  And so my little ESP-01 boards have been sitting gathering cobwebs. The Sonoff mains controllers on the other hand are VERY useful but it annoys the hell out of my that my software is now too big for the limited FLASH in these units – at least, for doing OTA remote updating anyway. All of that, for me, is now history.

A few weeks ago I noticed the Flash chips available for very little money and thought “go on then, why not” despite never having thought of updating Sonoffs – well, today, weeks later, they arrived, all five of them. I mean, at £1.86 for 5, or 37p each – you have to give it a go.

I got my fine soldering iron out (who’s bit is so fine it looks like it will last all of a week) and opened up the package.

The first thing I noticed is that these chips are slightly wider than the one in my little ESP-01 – chips shown side by side in the photo above. To remove the originals, I took my tweezers, put the side of the bit along the side of the chip – and when the solder melted, just lifted the chip a little – then did the other side. Came off a treat.