The idea of this project was to design and construct a robot that consists of a body and two wheels that would be able to balance on its own. This behavior is similar how a segway (a new mode of transportation) works. Our goal was to have a working finished product – a robot that, without human interaction, could balance on two wheels. 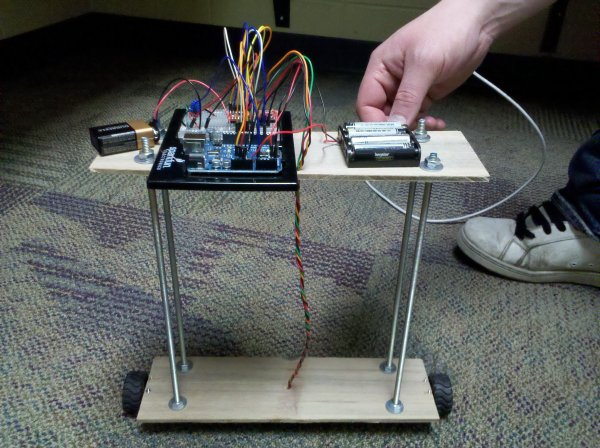 The design of this project is relatively simple at first glance. Physically we planned to have a body, which would be made of two platforms separated and held in place by four threaded rods. The bottom platform would simply be for holding the wheels in place. The top would hold the microcontroller and supporting hardware (which will be addressed next). The weight near the top helps keep the robot more stable, so the wheels can correct for tipping more gradually.

In order to make Theobald balance, we need the two most basic things in computing aside from the microcontroller itself – input and output. Our input consists of something that can sense what angle the robot is at in relation to the ground. A few things can do this: we could find distances from a side of the robot to the ground using infrared distance sensors or supersonic range finders, or we could use a combination of and accelerometer and gyroscopes to get the angle in relation to the earth and correct that way. Then we also need output. This comes in the form of our two motors which will attempt to right the falling robot. To control two motors without creating our own h-bridge motor controllers we need a motor driver with the following capabilities: interface with our microcontroller, output to two motors, and be able to go clockwise and counter-clockwise.

This project was done in a very collaborative manner. The main construction of Theobald (as far as the frame) was completed by Ethan since he was actually in the process of building a doghouse and had all the equipment and materials at hand. After the frame was complete all members collaboratively assembled pieces, soldered, researched, developed, implemented, tested and reimplemented. After finishing, the bulk of this webpage was completed by Ethan while Zech and Tony worked on our presentation. 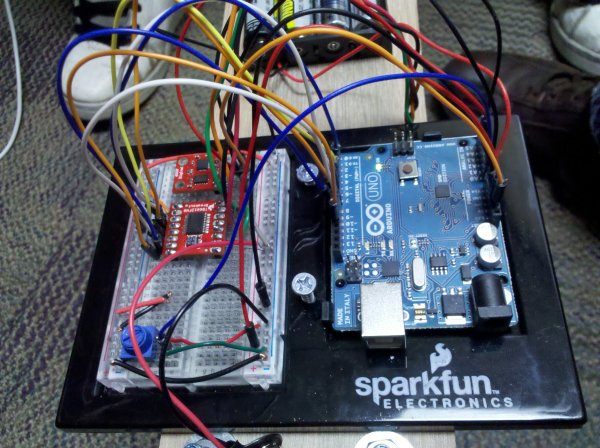 This accelerometer/Gyroscope combination (often called an Inertial Measurement Unit or IMU) is very convenient in that it combines two nice devices and uses a serial interface for output when requested. If the output instead was analog, it would be up to the ATMega328′s analog to digital converter to get a digital value which has only 10 bits of precision.