Note: When referring to Arduino below, this works in the same way on the emonTx which is arduino-based.
The DS18B20 is a small thermometer with a built in 12bit ADC; it can be easily connected to Arduino digital input. The sensor communicates over a one-wire bus and requires little in the way of additional components.
The sensors have a quoted accuracy of +/-0.5 deg C in the range -10 deg C to +85 deg C.

Multiple sensors can be connected to the same data bus; each sensor identifies itself by a unique serial number.

In normal mode, each sensor is connected between a power line (Vdd pin 3) and ground (GND pin 1), and the data output (DQ pin 2) connects to a third, data, line. The data output is a 3-state or open-drain port (DQ pin 2) and a 4k7 pull-up resistor to the power line is required. The data line is connected to a free Arduino digital input or Arduino digital pin 4 in the case of the emontx.

Normal mode is recommended when many devices and/or long distances are encountered.

Parasite mode should only be used when a small number of devices are used over relatively short distances.

If long cable runs are required, consideration should be given to connecting in ‘daisy-chain’ fashion where one cable runs from the furthest sensor, connecting to each sensor in turn before ending at the Arduino or emonTx.

There is more about this in the note below.

For short cable runs, unscreened two- or three-core cable, or single-core (parasite mode) or twin-core (normal mode) screened audio cable should be suitable. For longer cable runs, low capacitance cable such as rf aerial downlead (parasite mode) has been successfully used over a distance of 10 m. CAT 5 network cable has also been used with success over a distance of 30m, with data & ground using one twisted pair and power & ground using a second twisted pair.

Temperature Sensing with the emonTx

The emonTx supports direct connection of DS18B20 temperature sensors, however there are significant differences between the emonTx V2 and the emonTx V3. 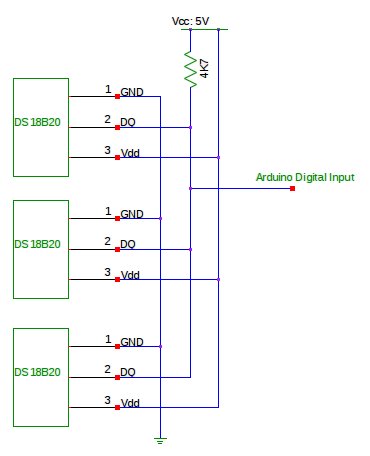 The sensors can be connected either in normal or parasite power mode. We recommend normal power mode for increased reliability. 3-core 22AWG wire is perfect for wiring up sensors. The sensors can also be bought ready encapsulated and wired up, and the 4k7 pull-up resistor is provided on the pcb.

Wire up the sensor(s) to a male 3.5mm jack as follows: