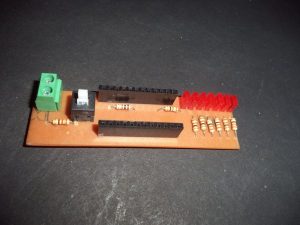 After that, I planned to make this project myself and Arduino is a good choice to build this spinning led display.

For this project, I designed PCB using Eagle CAD software. The reason to choose Eagle was to build a lightweight PCB, as there is high speed rotation involved in the project, and the PCB will be a part of the rotating module. In this circuit, “Arduino pro mini” is used because it is very small and powerful board.

Seven LED’s, a pair of IR LED and a Photodiode is also used. IR LED and Photo diode are used to design a feedback system; which gives the actual position of the rotor to Arduino. LED’s are placed in a single line and are connected to the Arduino board. A small DC gear motor is used to rotate this circuit; and when the circuit rotates the LED’s make a blink pattern that shows English alphabets. The code can be modified for displaying other languages.

The working of Rotating LED Display is very interesting and it can be used for decoration purpose, where you can make beautiful designs and graphics using this amazing project. This display can also be  used in public places like railway/ bus station and airport as a sign board, as it is very cost effective to build. Proper maintenance is necessary for the gear motor and rotating assembly. 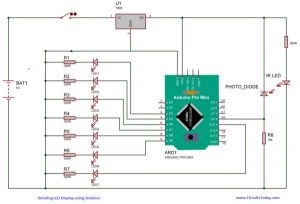 Circuit diagram is shown above. I also designed a PCB on EAGLE and the files are given below. it would be better to use etched PCB. PCB Etching process is a simple task, you can learn this from our blog. For PCB etching refers the figure given below.