The post explains how to build a simple sinewave inverter circuit using PWM feed from an Arduino Uno board, the article also discusses a sinewave 3 phase inverter using the same input from an Arduino. The idea was requested by Mr. Raju Visshwanath

As per the request the first diagram below shows a single phase PWM sine wave inverter using an Arduino feed for the PWMs.
The design looks pretty simple, the 4047 IC is configured as a totem pole astable for generating the basic 50 Hz or 60 Hz frequency. 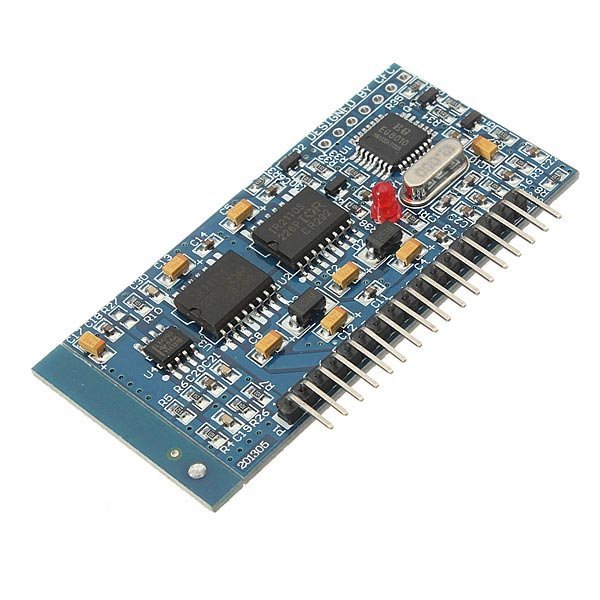 This frequency drives the two power BJ transistor stages alternately at the specified frequency rate.
The transistors could be replaced with IGBTs for getting better efficiency, but mosfets should be avoided as these may require special attention while designing the PCB, and additional buffer BJT stages to prevent heating up of the mosfets from possible hidden stray inductance or harmonics.

In the above diagram P1 and C1 determine the frequency of the astable which can be adjusted by suitably setting up P1 using a frequency meter for the intended inverter operating frequency.
T1 and the associated components which stabilize a fixed 9V for the IC 4047 may be eliminated if the selected inverter operating voltage is not over 15V, however higher voltage up to 60V could be tried and is recommended for achieving a compact and a more powerful inverter design.

The PWM from the Arduino is applied across voltage divider networks over the two outputs of the IC via reverse biased diodes which make sure that only the negative pulses of the PWMs interact with the power stages and chop their conduction appropriately.
As a result of these PWM chopping effect, the induced current inside the transformer is also correspondingly shaped for achieving the intended PWM sinewave stepped up mains voltage at the secondary of the transformer.

The PWM frequency from the Arduino must be set at around 200 Hz, if a programmed 50 Hz totem pole is available from the Arduino then the IC4047 can be entirely eliminated and the signals can be integrated directly with R2, R3 left side ends.

3 Phase Inverter circuit using Arduino
The following two diagram are designed to work as a 3 phase PWM controlled inverter from an Arduino.
The first diagram is wired using six NOT gates from the IC 4049. This stage is used for bifurcating the Arduino PWM pulses into complementary high/low logic pairs so that the a bridge 3 phase inverter driver IC IC IRS2330 can be made compatible with the fed PWMs. 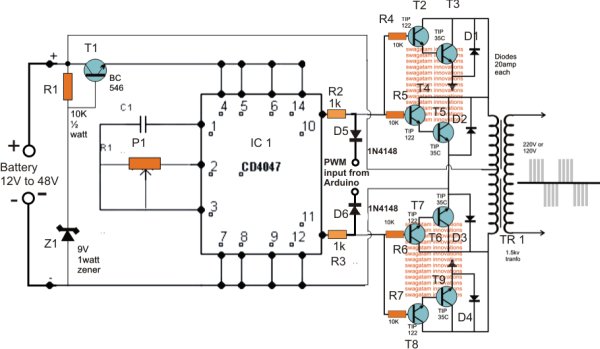 The second diagram from above forms the bridge driver stage for the proposed Arduino PWM, 3 phase inverter design, using the IC IRS2330 bridge driver chip.
The inputs of the IC indicated as HIN and LIN accept the dimensioned Arduino PWMs from the NOT gates and drives the output bridge network formed by 6 IGBTs which in turn drive the connected load across their three outputs.

The 1K preset is used for controlling the over current limit of the inverter by suitably adjusting it across the shut down pin of the I, the 1 ohm sensing resistor may be reduced appropriately if the current a relatively higher current is specified for the inverter.

Solar Tracker in the Internet Cloud

This is a Solar Tracker. A full size, internet cloud connected, smartphone accessible Solar Tracker built mainly from 2x4s and...