Nowadays, manual labor is being reduced at big scale industries and factories to increase efficiency and gain profit by installing robots that can do repetitive works. A onetime installation of such a device may cost a huge amount, but in the long run, will turn out to be more profitable that manual labor. Out of the lot, a simple robotic arm is one of the most commonly installed machines. We are introducing the basic concepts of an Arduino controlled robotic arm project. 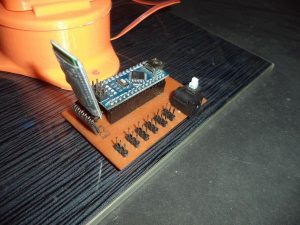 The programmable robotic arm finds extensive applications in its use in extreme conditions like space mission or underwater expeditions. It is also using in nuclear power plants and in toxic atmosphere
where human surveillance is difficult.

There are numerous types of robotic arm used in industries but going to give you details on a basic prototype. The movement of parts is done by servomotor, which can rotate approximately up to 190 degrees. The whole circuit is powered by 12-volt adapter and an Arduino Nano is used as the controlling unit. The servo motor for robotic arm is controlled by android mobile. The communication between mobile phone and servo robot arm is done by Bluetooth module HC-05.

The mini-robot arm uses four servomotors to move the arm. Servomotors are controlled by Arduino and connected to the PWM pin of Arduino. There are eight buttons in the android app. Out of these, four buttons are used to control the four servo motors. One button is used for clockwise rotation and other is used for anticlockwise of the mini robot arm.

The Bluetooth app interface is shown in the figure below.

Out of eight buttons, four buttons are Red and four are Yellow. When a button is pressed it sends a unique character to Arduino via Bluetooth. As soon as the Arduino receives the character, its command is identified and rotates the servo motor accordingly.

For clockwise rotation of servo motor the red button in the application is to be pressed. Four buttons are used for each servomotor. When the red button is pressed it sends two types of characters. First is the press character and the second is the release character. When a button is pressed, a character is sent through Bluetooth and the Arduino rotates the servo motor one degree in one cycle. If button is not released servomotor moves one degree in next cycle.

This same process is also used when yellow buttons are pressed, but this time the servo motor rotates one degree in the anticlockwise direction. Press and release characters are shown in the table given below.

In the circuit, Arduino Nano is used and Bluetooth module HC-05 is connected to it. Servomotors are connected to PWM pins
of Arduino and the circuit is powered with 12 volt DC adapter. 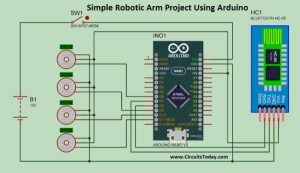