In the fall of 2012, we set out to construct a robotic arm for the Science Olympiad competition that would be capable of performing the required set of tasks efficiently and to perfection. This instructable will attempt to guide you through the thought processes used in the design and construction of this project. We spent countless hours working on this robot and hope to refine this into a condensed version for you to read at your leisure. We hope this can be an inspirational guide to help you through your next project.

Step 1: Get to Know The Masterminds

Before we begin, we’d like to
recognize all of the people and businesses that made this creation possible through their donations of time, resources, and guidance.

Although these companies were major contributors to the project, all of the design and the majority of the manufacturing were done by Jordan Vanderham and Matthew Budde, members of the West Ottawa Science Olympiad Team.

We would like to thank the following companies for being a part of our team and enabling us to make this robot:

Special events in Science Olympiad typically run for two years and then cycle to a new category. In fall of 2011, the Robotic Arm event was announced and our thoughts went wild. Working through this drive, we designed and built a robotic arm which, while impressive at the time, had multiple problems and wasn’t the best that we could do. This was a learning experience for the team; and one that we all benefited from greatly.

These pictures illustrate our first design. The arm used a hybrid drive of electric and pneumatic power to accomplish each task. We loved using the pneumatics due to their power and low cost, however, our approach raised some concerns, mainly about having a large tank of pressurized air strapped to a high school kid’s chest. The next year, the event rules made this approach very difficult, so we abandoned that in favor of our new design. If you would like to learn more about our 2011 robotic arm, feel free to ask in the comments and we will deliver.

As in every project, the design
stage can make or break the entire project. Before even picking up a pencil or drawing in CAD, we had to understand our problem. After reading the rules, we sat down with as many people as we could and started brainstorming. It is amazing what a group of people can do with ideas bouncing around constantly changing through each person’s point of view. We found ourselves spending much more time than anticipated just ironing out small design details during this process. Due to all of this attention, though, the rest of the project went remarkably smooth.

We spent time researching proven robot arm designs on the internet. At first, we considered making a “traditional” articulated joint style robotic arm, but we found that to be unfeasible due to the size restrictions, cost and high motor holding torque. After discarding that concept, we came across the SCARA style design. This struck us as being more efficient and easier to implement and control. This design allowed us to use lower torque motors due to this designs more planar nature, so the motors would not have to directly support the weight of the arm. Implementing the control would also be easier as the positioning of the effector of the arm did not require the movement of every motor.

The claw went through two manufactured design iterations with multiple concepts for each. The first design used a motor and a threaded rod to move one side of the claw towards the other. There was a torque clutch that activated a switch to stop the movement of the claw when it grasped an object. This method was proven, but it did not have the grip strength that was necessary for some of the heavier items. It was also rather noisy and not an elegant solution.

The second design used a Dynamixel AX-12A servo to pull one side of the claw towards the other along four guiding rods using the turning motion of the servo to wind a cord onto a spool from either side. This was a very effective method due to being able to control the torque of the servos to prevent catastrophic ping-pong ball crushing. The linear motion of this claw made it easier to pick up objects since one side of the claw never moved, allowing us to use that side as a reference point and the other side as the gripping force. The other advantage to this claw design is that, unlike some other designs, it moves in a linear fashion. Other claws, such as the scissor type claw, plunge as they grip. That extra motion would complicate our elegant solution to object manipulation.

You can see the amount of design time that we put into this part by just looking at it. We were burdened with budget and size restrictions and tasked with range, strength, and ability problems. This arm was designed to play with our restrictions and optimize our strengths.

This robotic arm was designed in Autodesk Inventor to ensure that every part of the robot had a place and that all collisions were avoided. Collapsing three expensive robotic arms into a 30 cm x 30 cm x 100 cm box can be stressful, but after seeing it done in CAD, we knew it could be done in real life. CAD helped us visualize and collaborate on the same level. Having the robot drawn up in cad let us go directly to a 3D printer or a CNC machine for fabrication. Coming into a project like this, we knew that it has to be designed in a CAD environment, but this is not always the case. Some projects are faster to prototype without a 3D rendering but long term projects usually are assisted with CAD.

The usefulness of CAD was demonstrated when we were designing the claw (see animated picture). The drive servo had a rotation of 300 degrees and we optimized the pulley radius to the desired grasping width and strength.

The main construction materials
for this robotic arm were Aluminum (cast and extruded) due to its high strength, low cost, and ease of machining. Aluminum provided a strong base and main support tower for the main rotational axis and each preceding joint. Carbon fiber (plate and square/circular tubing) was a key material in the construction and performance of our robotic arm. Due to its high strength to weight ratio we used it to connect each joint together to minimize momentum and strain on the motors as the arm swung around.

The carbon fiber was purchased from HobbyKing

Being able to turn a raw chunk
of metal into a finished, precise, custom part is a wonderful thing to know how to do. The process is almost magical and it’s so fulfilling to see your hard work and careful measurements turn out a small part that will ultimately be an integral part of a much larger machine.

We were fortunate enough to be granted access to multiple vertical mills for us to do the majority of our machining on. Prior to this project, we had limited machining experience between the two of us. By the time we got all of our parts machined, we were feeling pretty darn confident in our abilities to create precise, custom components. The only custom metal parts that were not machined by us were the brackets to hold the carbon fiber links. These were machined by the great people at Metalution, and they worked perfectly.

For the plate carbon fiber pieces, we used a small CNC cutter that our school had in one of the manufacturing technology classrooms. Machining this carbon fiber plate took quite a toll on the cutting tool and some of the edges were a bit fuzzy and frayed, so there was some cleanup work necessary after pulling them out of the machine. We weren’t completely surprised by that, so we were prepared with 250 grit in hand.

3D printing was a very
important part of this creation. Designing with 3D printing in mind enables us to not have to worry about the restrictions of subtractive manufacturing and just focus on optimizing the design. 3D printing also allowed us to prototype our claw design through its multiple reiterations and optimizations. Without this technology we would still be standing in front of a mill hashing out generation 1.298 claw. This technology is helpful, but it does not come without a few problems.

3D printing technology that was used to print our parts is similar to Full Spectrum’s SLA 3D printer but with a flip. We received help for this project from a local prototyping company, World Class Prototypes, that had a 3D printer where a resin was deposited onto a build platform through thousands of tiny piezo electric jets. This layer was then cured with an ultraviolet light. This printer could deposit two types of materials, typically a hard structure resin, and a soft support material. This support material had to be power washed off, so our restrictions for this printer was the size of an object that we could hold while cleaning it up and learning the printer and its tolerances. 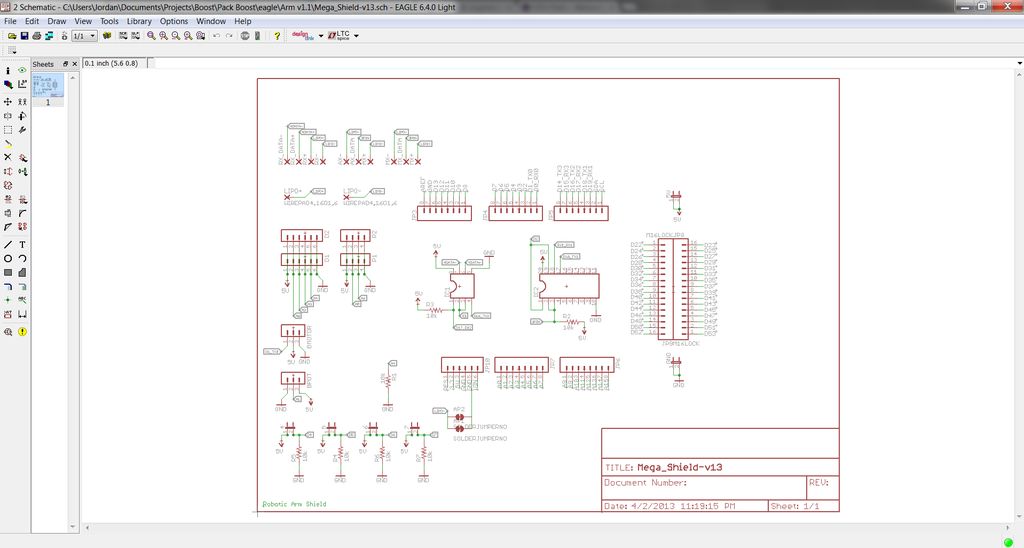 The two main arms are controlled by a pair of Arduino Mega Pro boards from Sparkfun. Although we didn’t use near the amount of digital pins that these Mega boards offer, we chose them due to their multiple serial ports. Three serial ports were needed; one for each communications protocol to the different Dynamixel servos (will go further into depth about that in Programming) and one to the Syren motor drivers from Dimension Engineering.

We designed a custom PCB and circuit in EagleCAD to connect all of the necessary components to the Arduino. These include two buffer chips for communication between the Arduino and the Dynamixel servos, assorted resistors, and connections for power and communications between all of the components. These designs were then sent off to OSH Park for high-quality manufacturing.

The third extension arm is controlled by an Arduino Uno with a proto-shield on top to connect the controls to the necessary inputs and outputs of the microcontroller.

The controllers for all three arms plug into their respective boards through rows of header pins for ease of connection. The PCBs are soldered to the Mega Pro boards to ensure reliable connectivity.

All three arms are powered by the same 11.1 volt lithium-ion battery from HobbyKing. Link

We also used the AnyVolt 3 for power optimization on our elbow servo, but unfourtionally we had to remmove them. Read more on step 12: Optomization.

A multidisciplinary engineering team at the University of California, San Diego developed a new nanoparticle-based material for concentrating solar power...