This is an instructable to show how to mount a webcam on a servo in a meccano frame and controlling it via an Arduino board.

For a while now I was looking to do something more than blinking LEDs with my Arduino.
This idea came to me while Skyping in our morning-meet with my colleagues to enable them to control what they see in our office. 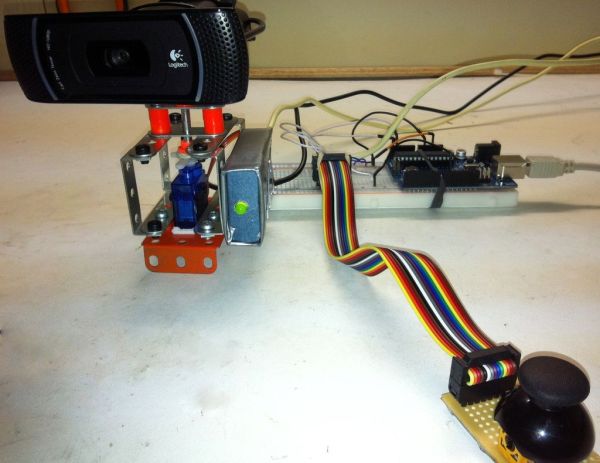 When I initially wanted to add the Instructable I saw a number of similar instructables, some of which used a thumbstick. Having had an old PS3 remote laying around I decided to incorporate it before building the Instructable 😉

We used an old Meccano set that I picked up at a 2nd hand market to build the frame.
We built it to mount on my tri-pod.

Step 2: Connecting the shaft to the servo

We used pratley putty to connect the shaft to the servo’s gear.

I picked the cross-shaped gear for no better reason than that I thought I’ll need it least of the lot of other gears that I got with the servo and saved them for future projects.

One has to take care to mount this really straight. I lined it up straight using my leveller (waterpas)

It was a fortunate co-incidence that the meccano bracket had almost the same width as the servo we used.
You can fix the servo to the base with a piece of double sided tape.

Webcam
I’ve used a Logitec webcam.
It’s probably a good idea to remove the counter-balance on the camera to make it lighter.
I’ve not done this since its the office’s camera and not mine.

Weight distribution
I’ve added 2 spacers to avoid that the shaft pushes against the base mounting plate of the camera. They basically displace the weight of the camera to the Meccano frame instead of directly into the servo’s gear.

Webcam mounting
The mounting piece for the webcam consist of a wheel with a shaped centre hole to fit to the shaft. This allows traction between the shaft and the wheel to ensure they turn together.

Some space is created by the spacers to prevent the base plate from pressing against the shaft. 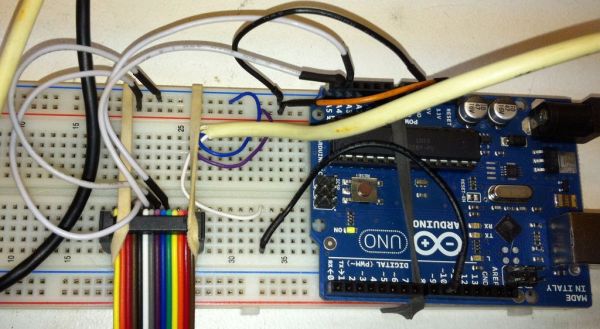 Problems:
– There is nothing fixing the webcam to the frame and the webcam it will fall off if tilted to far.
– The Meccano holes on the bracket above the servo are to large and allows to much horizontal movement causing strain on the servo
– Turning momentum of the camera causes over-rotation which in turn places strain on the servo. I want to try fixing it by turning 1deg back after a period of continuous movement but would prefer a mechanical solution. Possibly by adding gear and turn the webcam on a separate belt-driven shaft?
– …or use a stronger servo 🙂