A Reef / Saltwater Aquarium controller based on an Arduino Mrk1000 and controlled remotely by an Universal Windows Platform app. 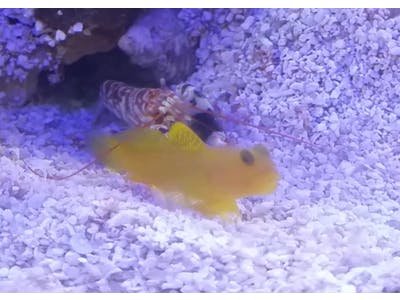 On a reef tank the temperature and lighting schedule are critical functions that can’t be left to a person to do manually. A completely automatic system isn’t good when you need to do maintenance on the tank or if something happens when you’re away. So an automatic controller like an arduino that can receive commands and send it’s status is an ideal setup. I saw the Mkr1000 and wanted to build this project on one. Luckily Arduino decided my project was good enough to warrant a free board!

Currently this project allows me to run 3 LED channels that fade in and out according to the time of day, set by the rtc. It also monitors the tank temp and turns on a cooling fan if the temp gets too high. Finally it allows me to shut off the pumps so that I can feed the fish without all the food being sucked into the overflow. All of this is controllable from a Universal Windows Platform app. Every time the arduino receives an http request it returns a json string with the status of the tank/controller. Simple get commands allow you to change the functions of the controller. 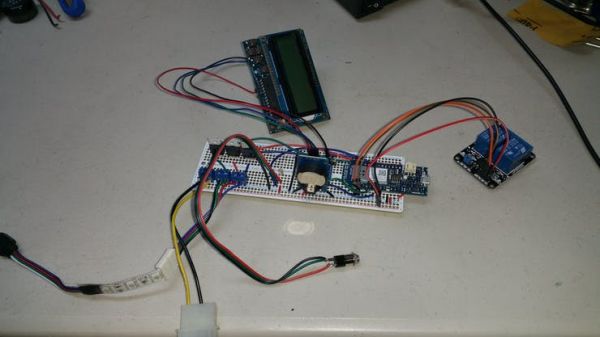 mkr1000 board all soldered up and tested. Just need to stuff it in a project box.

The lCD module displays the time and tank temp as well as the led outputs. If the temperature gets too hi the display goes from green to red and the LEDs are dimmed to help control the temperature until the fan can bring it back down.

While the project is up and running it is by no means done. I’m hoping to add in the ability to control the functions via the menu buttons on the LCD and update the UWP app to monitor and configure my quarantine tank controller as well. I’m also close to pushing data to my Azure IoT hub but I ran out of time. I think this will be a nice addition so that I can track tank parameters over time. 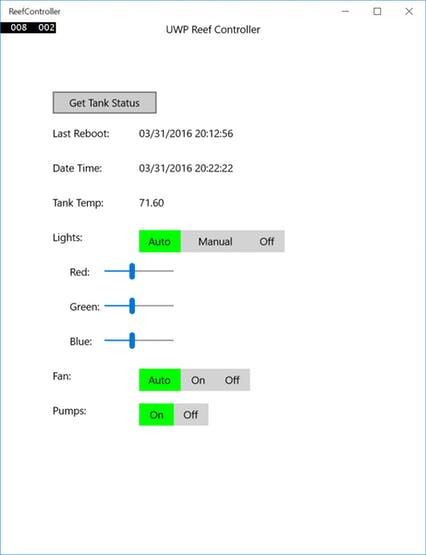 For the UWP I used Visual Studio 2015 Pro with Git Hub installed. The code is written in VB.net. Make sure you set the device’s ip address in the device constant for the program. Other than that it should be ready to use.

How to Build an Air Guitar With Arduino, Aka the AIRduino Guitar

The idea here is to build a wearable virtual guitar that is to be controlled with two hands much like...