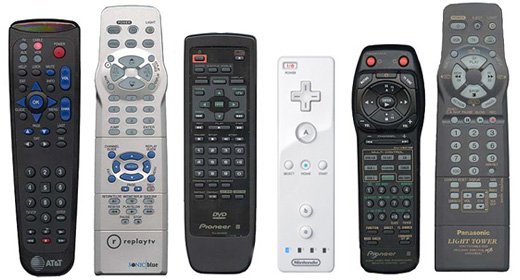 We use them every day, but has no one got bored of pressing buttons on a stick, it’s far too much effort pressing buttons! Surely there are better ways to control a device? After doing some work with my Nikon camera using IR to control it, I wanted to do the same with other devices. Check out the video at the bottom of this post…

However, unlike the Nikon remote, my Samsung TV remote has many many buttons so each IR sequence sent from the remote will be different. This can be a problem when you want to decode the signals, which while not impossible I am lazy, so thankfully Ken Shirriff has built a library to do just that and while its built for TV remotes you can decode an IR signal to its raw pulses using it. Essentially the library senses IR and notes each pulse and gap between pulses, Kens library saves a lot of time and its well coded – I’ll cover the basics of it in a bit.

My idea is to capture the IR sequences and then using the Arduino send them by using different inputs other than buttons. My first idea is to use my SRF05 distance sensor (You can use any distance sensor) and the premise being that different distances from the sensor send different signals to the TV. So rather than pressing a button you just wave your hand above the sensor. Of course this is slightly limited but since I only have 5 channels (yep – only 5!) so it turned out to be quite feasible.

There are drawbacks to this of course – the main one being that you can only define so many actions in the sensors dectection range. But there is plenty of range to do the basics, power, sound and channel and by constantly measuring distances we can even say the direction of movement, up to down and vice versa, can have an effect on what signal to send. For example moving your hand closer to the sensor will change the channel down.

So first of all you may want to read some of my other tutorials/projects concerning IR and the SRF-05 and Sharp IR (it should also work well).
Arduino Nikon IR Intervalometer Camera Remote
SRF-05 – contains handy wiring diagram!
Arduino and Sharp GP2Y0A02 Infrared distance sensor
(Other Arduino projects and tutorials)

Oh and stating the obvious but you’ll also need a T.V with working remote to steal the signals from – course you can use other remotes (stereos etc..) 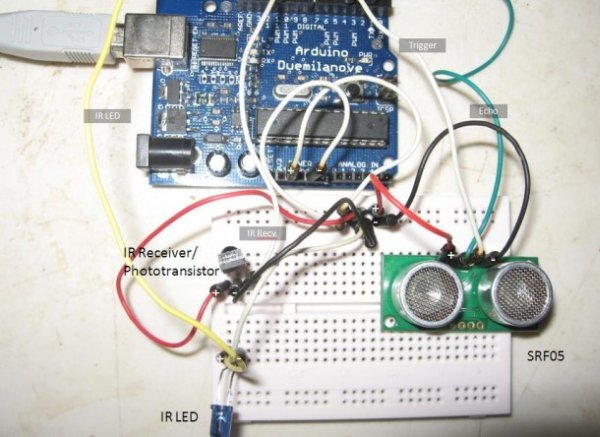 The circuits themselves are very very easy to build, an IR LED to pin 3, a IR receiver to pin 11 and the SRF-05 I’ve plugged into pins 2 and 4. I have all of them in one breadboard and it works very well (see below).