Public Release of ESP32 SoC The Big Brother Of ESP8266

It has been about one year since the announcement of ESP32 SoC and the beginning of its beta testing for some developers. 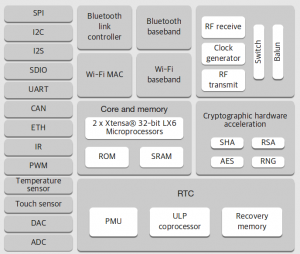 Last Month we covered the release of ESP-WROOM-32 module datasheet,  which promised that “New SDK features, tutorials and example applications will be released over the next few months.”.

The ESP-32 datasheet was released at the end of August. So let us discover the details of ESP-32 SoC.

The security is enhanced in ESP32 by supporting WPA/WPA2/WPA2-Enterprise/Wi-Fi Protected Setup (WPS), while ESP8266EX supports only WPA and WPA2.

ESP32 features a BT4.2 controller and host stack with Xtensa Dual-Core 32-bit LX6 microprocessors up to 240 MHz. Keep in mind that ESP8266 has single core and lacks a bluetooth transceiver.

A pocket watch, tucked into a waistcoat pocket and trailing a long chain, is a retro-hip accessory. A pocket watch...