What’s up my friends, welcome back. What I want, is the aluminum block below to have let’s say, exactly 100 degrees. I’ll control the real temperature using a K type thermocouple. To read the data I’ll use the MAX66 75 breakout module and control the PID algorithm with and Arduino. Finally, to apply power we will make a small circuit using a MOSFET or maybe a TRIAC in case of high AC voltages. This will be a close loop. The thermocouple measures the real values, the Arduino creates the signal applied to the MOSFET and this transistor will control the power of a heating element inside of the aluminum block and once again the thermocouple will measure the value, that’s why it’s a close loop. 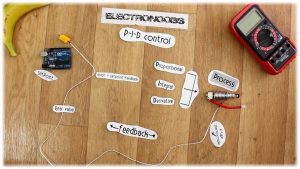 So, the first thing is to understand how a PID temperature controller will work. As in any PID system we need to define a final process, in our case will be the final temperature that we will achieve. In order to control this temperature, we will need a feedback. So, any PID control will have some sort of feedback. In our case, that feedback is made using a K type thermocouple that will measure the real temperature of the system.
This type of control will also need a setpoint, which in our case is the desired temperature. The system will make the difference between the desired value and the feedback from the output (error), and using 3 constants, the proportional, the integral and derivative, we can change the output according to the feedback.

So, if we want the heating block to have exactly 100 degrees what we will do first is apply power to it. This will start heating up. By the time it reaches the setpoint value, which in this case is 100 degrees, the feedback will inform that to the PID control and this will start lowering the power applied to the heating element, and in our example that will be made using a PWM signal applied to a MOSFET that will control the voltage that goes to the heating element inside the block.

Relive the fun of early computer game music with an authentic 8-bit chiptune synthesizer, which you can control over MIDI...