Not many people know, but in some smoke detectors, radioactive materials play an essential role. Today I will present one of those devices, and my -successful- attempt to reverse engineer it and get the circuit diagram. 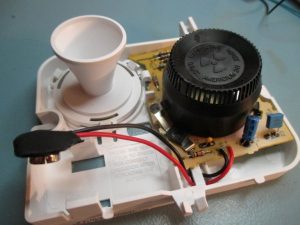 Those smoke detectors use a small amount of Americium-241 (chemical symbol: Am) obtained in nuclear reactors as a decay product of Plutonium-241. Am241 emits mainly alpha particles, but also some gamma rays. In smoke detectors it is in a form of an oxide Am02.

When alpha particles collide with atoms in the air, as a result, ions are produced. The amount of those ions is measured by smoke detector and is quite stable over time (Am241 has half-life of 432 years), however, when the smoke is present, smoke particles neutralise alpha particles, so the measured value drops. This drop is the signal of fire, so the smoke detectors start buzzer to alert people in the building.

To measure those ions (produced by ionizing radiation), ionization chamber is used. It has a form of two differently charged plates shaped and placed in such distance that the ionizing radiation can flow between them.

Those plates, when charged, create an electric field that attracts those ions. When they are collected by plates, and additional voltage is created between plates, this voltage can be measured. The bigger this additional voltage, the bigger is the ionizing radiation.

When those smoke detectors are used as designed, they don’t pose a radioactive hazard, however, if those devices are disassembled, it must be done with great care. Alpha particle sources (as used here) are very dangerous if they came into the lungs in a form of dust. They are also dangerous if digested.

On below image, you can see the ionization chamber. It’s connected in the air directly to the pin of the chip to avoid parasitic currents flowing on the PCB. This is because voltages created by ionization chambers are very low. Radioactive element is inside of the ring.