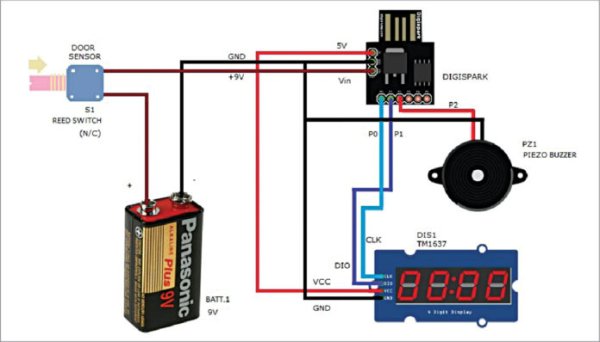 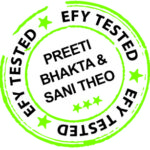 Ever accidentally left your room door ajar for a long period of time and found your valuables missing? Here is an intelligent solution for you. The idea is fairly simple as it mainly requires a TM1637 4-digit display and a Digispark USB development board. 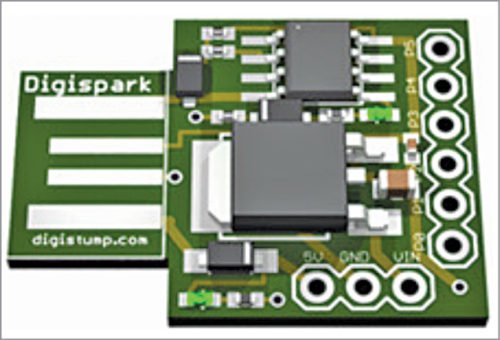 Digispark USB board, based on Atmel Attiny85 microcontroller, is similar to Arduino hardware platform. However, it is smaller with limited pins, and a bit less powerful than Arduino.

Arduino-compatible code (door_ajar.ino) is used for this project. The code displays the countdown timer and initiates an alarm after a set time of about 60 seconds. Here, DigitalTube library created by Frankie Chu (Website) is used to control the 4-digit display.

So, first download the library, extract contents of the zip file to arduino/libraries folder, and restart the Arduino IDE. Now you can see DigitalTube listed under Sketch/Include Library options in Arduino IDE. Next, copy door_ajar.ino code into the Arduino IDE (Arduino IDE 1.6.6+) to compile and program Digispark.

To program Digispark, first you need to install relevant drivers from the Arduino IDE by selecting Tools/Board/Boards Manager/Digistump AVR Boards options. For details go through the tutorials at this link.

After successful installation of the drivers, Digispark will feature in the Board list of Arduino IDE. Select the correct board as per the Digistump model you have. We selected Digispark(Default-16.5MHz) option. Click Sketch/Upload options from Arduino IDE. You will be prompted to connect Digispark board to the USB port of your PC. As soon as the board is plugged in, the code will be uploaded. Now, plug-out the board and make connections as per the circuit diagram.

After construction, enclose the electronics (including the door sensor) in a small box made of rigid plastic and mount it on the door frame. Attach an appropriate-size magnet on the door such that when the door is closed, the magnet comes closest to the sensor (reed switch S1) and its contacts open. Use an appropriate 9V alkaline battery pack to power the system.

Not many people know, but in some smoke detectors, radioactive materials play an essential role. Today I will present one...