Gateworks Corporation announces the Newport Family of single board computers featuring eight standard models. These models range in size and features to provide a comprehensive and flexible solution to customers requiring a high performance, feature-rich embedded networking board. The Newport Family is based upon the Cavium Octeon TX 64-bit ARMv8 SoC, which has been designed specifically for high performance networking applications. The Newport Family of boards offers processors ranging from an 800MHz Dual Core up to a 1.5GHz Quad Core. The Octeon TX features large L1/L2 caches, rich I/O with support for the latest standards (PCIe Gen 3, SATA3.0, USB 3.0, DDR4), security and networking acceleration engines, hardware virtualization, low power (<4W) and IPSec performance of 8Gbps with only 2-cores. 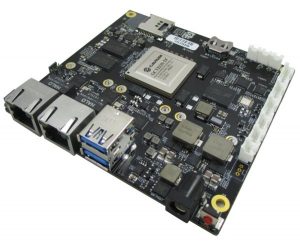 “Gateworks is proud to be one of the first companies to offer a single board computer based on a Cavium Octeon TX processor. Gateworks selected the Octeon TX for its next generation of processor boards because it provides unparalleled performance and support for the latest interface standards, giving our customers a competitive advantage in their respective markets.” notes Doug Hollingsworth, Gateworks Corporation VP of Engineering.

The Newport Family of network processor boards feature up to 8GB DDR4 DRAM, up to 64GB eMMC Flash, up to 5 GbE Copper Ethernet ports, up to 2 SFP ports for fiber support, microSD, SIM, USB3.0 and up to 4 Mini-PCIe expansion sites allowing support for a variety of peripherals including Wi-Fi radios, 4G/LTE cellular modems, mSATA drives and other Mini-PCIe cards. Optional features include GPS w/PPS support, CAN bus and a SHA-256 crypto-strong symmetric key-based authentication integrated circuit for secure deployments.

CHARACTERISING A POTENTIOMETER WITH A STEPPER MOTOR

Potentiometers, or variable resistors, are a standard component that we take for granted. If it says “10k log” on a...