CHARACTERISING A POTENTIOMETER WITH A STEPPER MOTOR

Potentiometers, or variable resistors, are a standard component that we take for granted. If it says “10k log” on a volume pot, than we fit and forget. But if like [Ben Holmes] you are modelling electronic music circuitry, some greater knowledge is required. To that end he’s created a rig for characterising a potentiometer to produce a look-up table of its values. 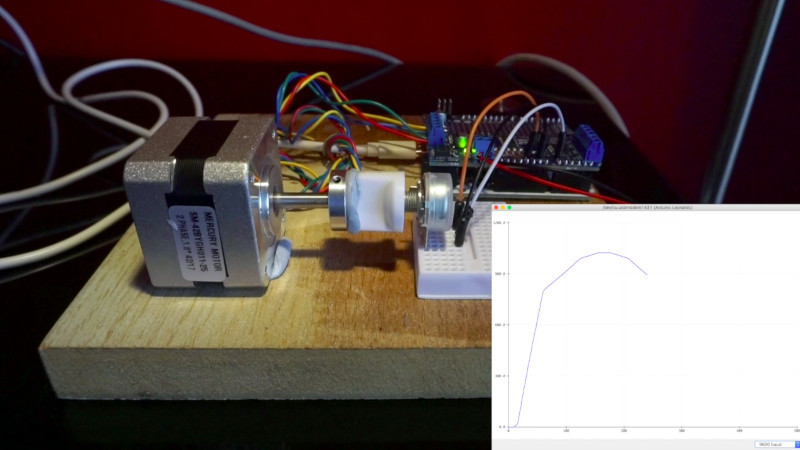 It’s a simple enough set-up in which a voltage controlled current source feeds the pot while an Arduino with a motor controller turns it through a stepper motor, and takes a voltage reading from its wiper via an analogue pin. Probably most readers could assemble it in a fairly short time. Where it becomes interesting though is in what it reveals about potentiometer construction.

Audio potentiometers are usually logarithmic. Which is to say that the rate of change of resistance is logarithmic over the length of the track, in an effort to mimic the logarithmic volume response of the human ear in for example a volume control. If you are taught about logarithmic pots the chances are you’re shown a nice smooth logarithmic curve, but as he finds out in the video below that isn’t the case. Instead they appear as a set of linear sections that approximate to a logarithmic curve, something that is probably easier to manufacture. It’s certainly useful to know that for [Ben]’s simulation work, but for the rest of us it’s a fascinating insight into potentiometer manufacture, and shows that we should never quite take everything for granted.

Source: CHARACTERISING A POTENTIOMETER WITH A STEPPER MOTOR

The Micro Maestro is the first of Pololu’s second-generation USB servo controllers. The board supports three control methods — USB...