Skip to content
This instructable will show you how to create a multifunction platform with a thermometer, chronograph (count up timer), count down timer, and light display. It is also intended to be a platform for other analog sensors or any other functions you can think of. 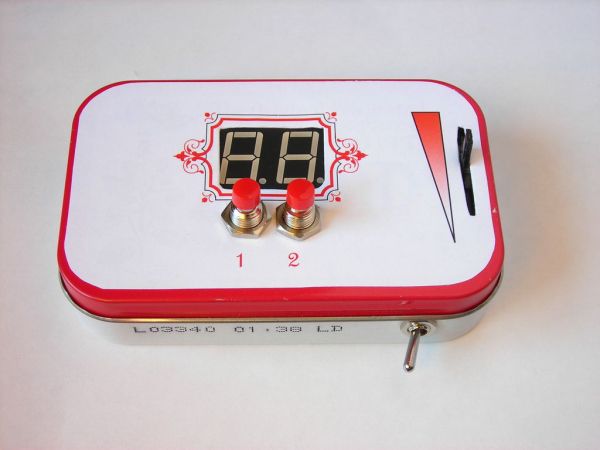 For this step, use the attached schematic (word or AutoCAD) to build the circuit. I always find it helpful to first build it on a solderless breadboard. This makes it easy to fix any problems that arise before you want to pull your hair out 🙂

Before you start soldering it is probably best to first cut the breadboard to the final size and arrange all of the larger parts on the board (as seen in the 2nd image below). Don’t forget to allow room for the buttons above the board and a power button off to the side.

It should be noted that in the schematic that R5 is a comparison resistor for the thermistor, and it might be included in your thermistor, so you should check your data sheet for how to implement your specific thermistor.

To calibrate the thermistor, you need to take readings from the microcontroller at different temperatures (the more the better).

I have attached the hex file to be loaded into the microcontroller’s flash to display the analog input from the thermistor. If it reads with a line in the output, it is because the thermistor input is too high to be displayed on two digits (example the output -5 could be from 155 to 105).

The points should then be plotted in excel as a scatter plot, not connected by lines (for an example see my temperature readings attached below).
You then need to right click the data points on the graph and click “Add Trendline”. 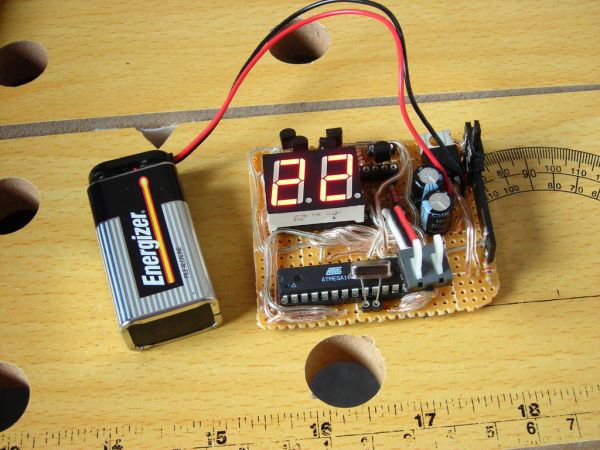 Next choose the type of equation that is closest to the apparent line created by the sample points (I used a linear equation because my thermistor is made to have a linear output). Next click the “options” tab and select “display equation on chart” and click OK. This equation should be entered in the place of the formula in the source code, where x is “analogRead(tempPin)”. The spot to do this is indicated in the source code(found in the intro).

The editor I used for the source code is Arduino 0007. The program also creates the hex files in the applet sub folder of the project when you click the compile button in the program. These hex files can then be loaded into the flash of the microcontroller using any method(such as the AVRIsp mkII).