I’ve been working on a midi controller for some time now, Midi OUT hasn’t been a problem, but for Midi IN i had to take some more time.
i’ve used this circuit for midi input but i’ve used a 4n25: 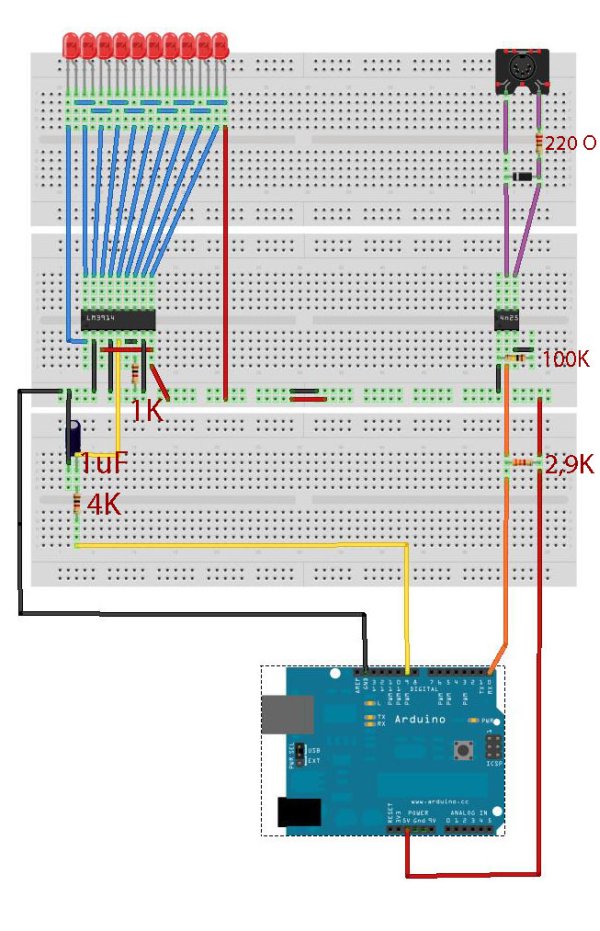 But i could’nt get this to work. while this easily could be a coding problem, i didn’t want to waste 10 pins per VU meter, so i searched some more and found a LM3914.
i thought to myself i could easily make this work through a single PWM pin, so this would save me about 36 pins. in total i need 4 (mono) VU meters, so i would have to use 4 pwm pins.
so i bought the LM3914 and then other problems turned up. luckily i found this forum!

especialy Sgt Wookie answers on the LM3914, were very helpfull.

so i constructed this schematic
now i made a RC-circuit in between the Arduino and the LM3914. with a 4Kohm resistor and 1uF cap.
also this seems to work fine, for example i can output a value of 80 from the pwm pin and this will light up all leds, or i can output a value of 41 and this will light up 5 leds.
i also tried connecting the circuit to the line out of my computer, as expected the leds do not correspond with the actual db’s, but it light’s up at the same time as the VU meter of my mixer does, so i know it is fast enough to keep up. 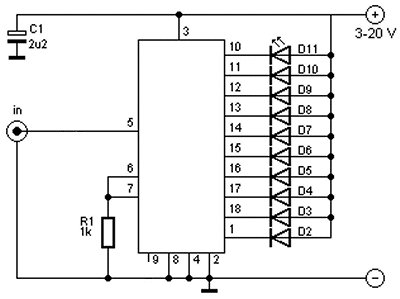 and here is the problem, when this circuit is connected to the PWM pin of the arduino, it’s always one beat behind, it kinda looks like a bad stop motion movie…
so i guess the problem could be in the coding, but just as good in the circuit.
hope this is enough information and i really hope anybody here can help me out, i’ve been trying to make this work for over three weeks now…asked at different forums, but haven’t found an answer so far.
here is the schematic and code i use now:
btw i’m reading the left master output channel, through midi with a single note, with a velocity range between 0 and 127.

Hey guys, I built another board, which is a 3-channel (RGB) LED driver based on an inexpensive chipset called PT4115...