How to Make a POV Display Using LEDs and Arduino

Here is a simple project using an Arduino and some LEDs. What we are going to learn here today is how to make a POV display or Persistence-Of-Vision display. It is made out of just 6$ worth of components. This tutorial gives will teach you how to make a simple and a cheap Arduino POV display. We can use this display as a pocket-sized portable message showing device and tabletop clock. 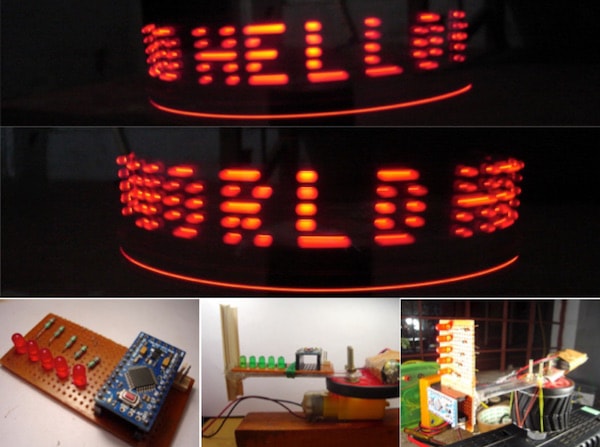 What is POV(Persistence of Vision)? It can be defined in simple words. When a person sees an object, its image remains in the retina of the eye for a time interval of 1/16th of a second. This phenomenon is known as persistence of vision. This phenomenon is used in the POV Display to form images. We turn the LEDs on and off in such a way that the different images overlap each other forming letters. For example:

This way we can visually see the letter E formed by the LEDs but the time interval would be very small in milliseconds. Due to the short time intervals and the ability of the LEDs to turn ON and OFF very quickly we can see the letter E as all the 3 images merge. As the motor is spinning and time passes, each LED moves from one position to the next, so all these images merge together.

Making the Circuit for the Portable Arduino POV Display

Read More:   How to Make a POV Display Using LEDs and Arduino

READ  Getting Started with Arduino – LED Blinking
‹ Previous Next ›

Signal and power from the same voltage source Most hobby electronics store carry cheap and ready to use digital voltmeter...