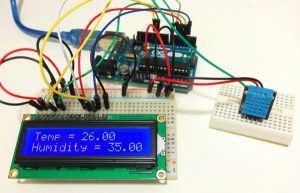 In this tutorial, I’ll first go into a little background about humidity, then I’ll explain how the DHT11 measures humidity. After that, I’ll show you how to connect the DHT11 to an Arduino and give you some example code so you can use the DHT11 in your own projects.

BONUS: I made a quick start guide for this tutorial that you can download and go back to later if you can’t set this up right now. It covers all of the steps, diagrams, and code you need to get started.

Here are the ranges and accuracy of the DHT11:

What is Relative Humidity?

The formula to calculate relative humidity is:

Relative humidity is expressed as a percentage. At 100% RH, condensation occurs, and at 0% RH, the air is completely dry.

How the DHT11 Measures Humidity and Temperature

Control MeArm Robot With MKR1000 And Your Smartphone

This project allows you to control a MeArm Robot with your smartphone, as if you had many potentiometers in your...