After making a 8X10 matrix a lot of people asked me about expanding the matrix to some thing bigger, and some wanted to write stuff to the matrix via a PC, so one day I looked at a pile of LEDs that I had leftover from a LED cube projected and I decided to make a bigger matrix with all the things people wanted.

So what are you waiting for? Get those LEDs out and heat up your soldering iron because we are about to make a 24X6 LED matrix!

Step 1: Getting All The Right Things

So you will need the basic set of tools for this project : a soldering iron, some solder wire, a cutter, a needle nosed plier,some wire, wire striper, and some desoldering tools if you need them. 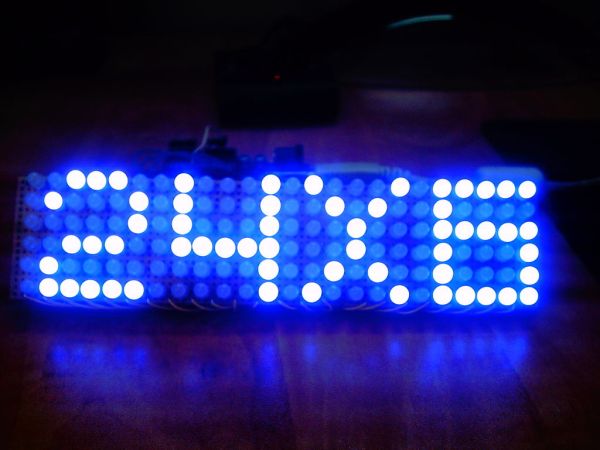 The tricky behind the display is multiplexing and the idea is the same as withe the 8×10 LED matrix: It is basically a way to split information in to little peaces and send it one by one.
this way you can save a lot of pins on the Arduino and keep your program quite simple.

Now this time we have 3 shift registers which multiply the number of outputs and save lots of arduino pins.
Each shift register has 8 outputs and you only need 3 arduino pins to control almost an limited numbers of shift registers.
We also use the 4017 decade counter to scan the rows, and you can scan up to 10 rows with it because you have only 10 outputs but to control it you need only 2 pins.
The 4017 is a very useful chip and it’s a good idea to know how to work with it(http://www.doctronics.co.uk/4017.htm)

Like I said the scanning is done with the 4017, by connecting one row at a time to ground and sending the right data via the shift registers to the columns.

The only thing I didn’t specified in the schematics is the value of the current limiting resistors because they change from each type of LEDs, so you will need to calculate them by your self.

Now to calculate the value of the 24 resistors you can use this site :
http://led.linear1.org/1led.wiz
You should first get some specs on your LEDs, you should know their forward voltage and forward current, you can get this info from the seller. The circuit operates on 5V so your Source voltage is 5V.

Download the original file to see the schematics better.(press the “i” icon in the top left corner of the picture)

I have added a PCB layout of the control board, and i want to thanks Willard2.0 who made this layout and let me use it so thanks a lot mate! 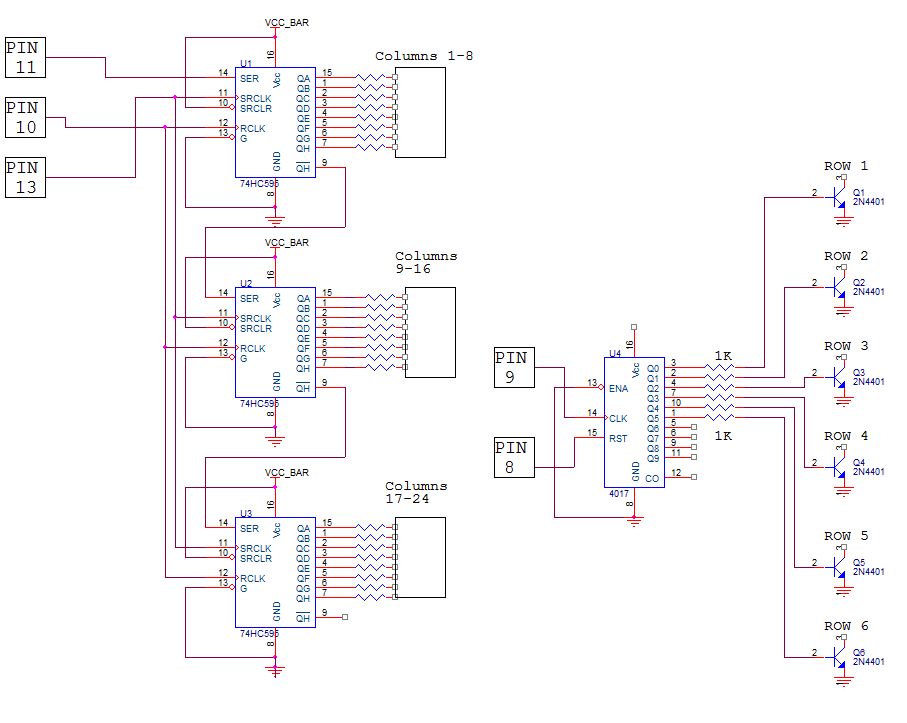 Soldering 144 LEDs in a matrix formation can be a little tricky if you don’t have a general idea how.
The last time I soldered a matrix I used lots of little wire jumpers which was a pain to solder, so this time I was a little more creative and came up with this way.

Now I will not explain how to solder the shift registers and all the parts because every one has hes own style and methods.

1 thought on “Make a 24X6 LED matrix using an Arduino”