Learning Game Programming with Esplora at the Iron Yard

Anne Mahaffey is an engineer with Analog Devices and was one of the beta testers for the Arduino Due. Anne’s been an ardent advocate for Arduino at Analog, and recently contacted us about a workshop she was planning with the Iron Yard, an accelerator in her hometown of Greenville, South Carolina. The workshop was to introduce kids to programming in Scratch, and to let them build their own game controller with Arduino. She had plans to do it the way many Arduino workshops go: introduce the kids to a little electronics, then a little code, then get them building. She happened to reach us about the time we were putting the finishing touches on the new Esplora, and since we had a good reationship with her as a beta tester, we suggested that she try the Esplora instead. We had a good feeling about it, but no one had used it for a class yet. But Anne’s game for anything, so she said yes. 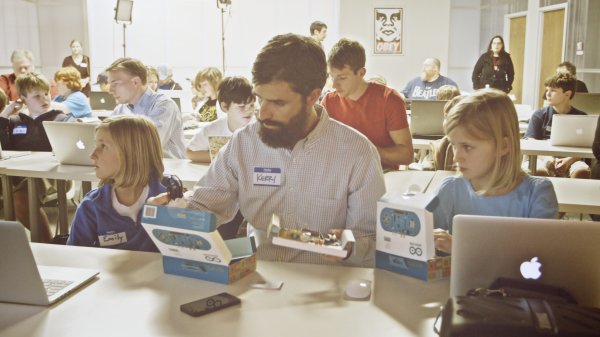 When she got the boards in hand, she was a bit skeptical:

“I won’t lie. The Esplora was not at all what I had in mind… what about the breadboard? The wires? The hookup diagrams? Isn’t that the fun part? Is it certain that my perceptions/opinions are being colored by my extremely specialized professional experience as an Analog/RF-centric Electrical Engineer?”

But she gave it a try. The results were promising:

“My first class was last night. I had 17 kids, mostly aged 10-12, if I had to guess. Each child (or sometimes, pair of siblings) had a parent. I had 5 or so volunteers, as I anticipated the first class would be the most challenging.

“It only took about 10 minutes to hand out Esploras, connect them, select correct board and port, and upload EsploraBlink. We had two Windows machines that we had to work with b/c they had many COM ports, so we needed to investigate which COM port was associated with the Esplora.””

For more detail: Learning Game Programming with Esplora at the Iron Yard

I have an Arduino Uno connected to two IR transmitters and respective receivers. Basically, when one of the receivers detects...