I came across a stash of iButton T-sense 1-wire sensors.. so I grabbed a couple and decided to check out 1-wire.

Maxim makes a 1-wire device called the DS18B20. It’s a 9-12 bit temperature sensor with the possibility of being powered by parasitic power from the data line. This cuts the signal path down to a single DQ line and a return. A company called iButtonLink produces a nice little wrapper around this device called a T-Sense. There are a couple pieces of software out there that will allow you to hook these up to monitoring systems, I don’t have any though. These devices come with a 64-bit address code and can be daisy-chained which makes having many of these devices monitored very nice. 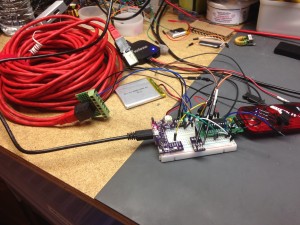 At first I thought, ugh.. lame I have to send, and parse 64-bit codes in a little 8 bit micro.. doesn’t sound like a ton of fun for just fooling around on a day off.. thank fully they have a “Skip ROM” feature/command which works similar to a broadcast but can only be used when you have one device on the bus. If there is one thing left in this project I might consider finishing it’d be to add the addressing in and daisy-chain a few of these.

Most of my research came from Microchip’s Application Note AN1199 though the T-Sense Users Manual also helped out including determining the wiring diagram.


READ  iBreathe, A Breathalyzer Based on Hexiwear
‹ Previous Next ›

Steps On the breadboard, build two bi-directional motor control circuits (also known as "H-bridge") circuits. These circuits will control the...