I Let Everyone on the Internet Control My X-Mas Decoration

Control any of the 55 RGB LEDs on the tree, let Santa twerk for you, control a model railroad, or display custom text on a LED dot matrix. 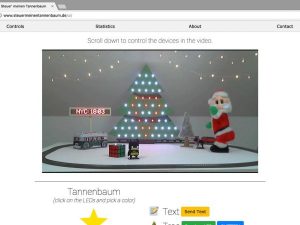 Ooooops.. I think I made a mistake and accidentally posted the project twice, on “Arduino Create” AND “Hackster.io”. Please visit: this site to read about our crazy idea. Sorry!


Have you always wanted anyone in the world to be able to control your X-mas decoration in your living room? – No? – We neither, but we built it anyway.

I had the idea quite a while ago, since I always loved projects where you could control somebody’s X-mas lighting, a robot arm or generally anything over the web and watching it live on stream. But I was never really sure, if there’s anyone else in the world who would dig it and I had no idea how to get requests from anyone on the internet to my Arduino.

Then one day – a few weeks ago – I told a friend what I had in mind and surprisingly he was immediately into it. He’s a computer scientist and said he could program an API on node.js, which would run on a Raspberry Pi. The concept was born.

I made a quick, professional and definitely not shitty looking diagram to describe our basic setup:

To sum it up briefly:

We made a simple webpage, which uses ajax to send http POST requests to our API.

The api is a Node application which runs on a Raspberry Pi with a fix and from the web available IP. It sends two bytes over a serial port to an Arduino Mega with a custom shield (Why Mega? I had one laying around and its multiple serial ports come in very handy for debugging). The first byte we call: “status byte” the second one: “data byte” (in dependence on Midi).

The Mega then runs code which interprets the serial data and controls all the actuators plus LEDs (P9823 / WS2812).

Read more: I Let Everyone on the Internet Control My X-Mas Decoration

I wanted to try my hand at a true "DIY" project, designing and building my own micro quadcotper frame and...