For science fair this year, I felt like building something instead of doing an experiment. All I needed to do was look around Instructables for a project idea. I was inspired by njkl44’s robotic hand since it reminds me so much of stuff out of science fiction movies. My goal was to create a system of haptic feedback from a robotic hand like that. The system provides a way for the person controlling the hand to “feel” what the robotic hand is feeling. I thought that this was an excellent project since it gave me something to do for science fair, and it provided me with a platform for constant development. In other words, I will not stop working on it. I will always try to come back to it, so I can make various improvements or redesign it every now and then. 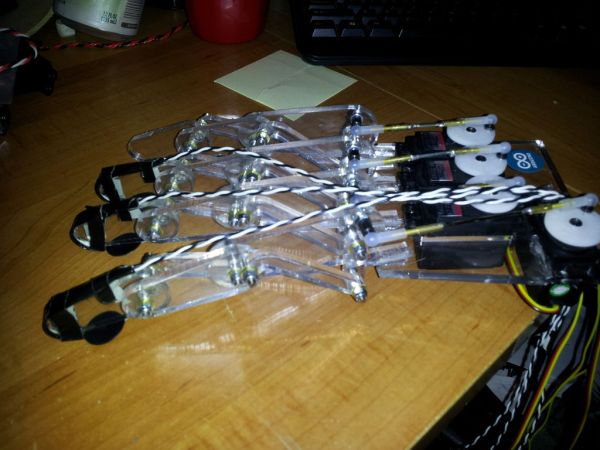 Per Finger:
A2-70 bolts- 3 with a beveled head and 4 with a regular head for each finger
Nylon-insert lock nuts for the bolts
4-40 x 1/2″ machine screw and matching nut
2-56 Threaded ball link (for connecting the finger to the servo)
Jumbo paperclip (used for connecting the ball links)
(x28) #4S washers

Each of the fingers uses two sets of four-bar linkage. I will show you how this works with the two pictures of the finger below.

For the parts, I was able to get them laser cut out of acrylic at my local hackerspace, HeatSync Labs. Acrylic is an excellent material for smaller loads and basic testing, but if there is any sort of major strain on the finger, you run the risk of snapping the parts. Instead of acrylic, it would be better to get the parts made out of metal for larger loads.

There is no scale on the .dxf files. For the fingers, the holes should be 2.8mm. For the palm, the rectangles are 20x40mm. I used Hitec HS-322 HD servos, and they fit perfectly. You will have to take the servo case off and put it back together in the hand since there is a small lip where the wires come out.

Step 3: Put the Fingers Together

Originally, the fingers used 4-40 bolts for all of the holes, but since the metric bolts fit better, I swapped all of the bolts out.

I needed to bevel the inside holes on the parts in order for the beveled bolts to sit flush with the surface of the acrylic. To do this, I used a drill press with a drill bit the same size as the beveled heads. I also cut the bolts down a bit to prevent them from catching between the fingers. 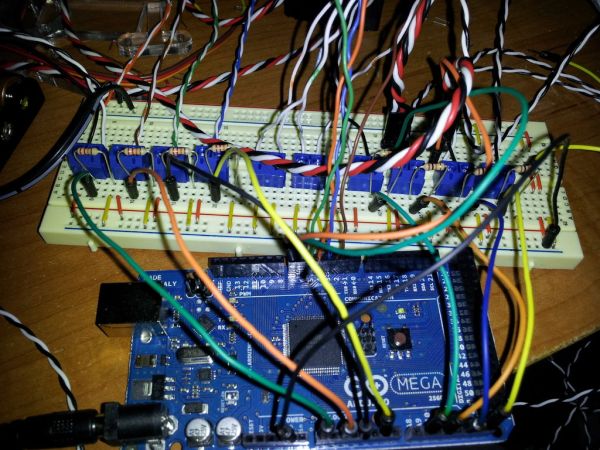 CUT THE BOLTS CAREFULLY. This can cause trouble if done without safety glasses and gloves. Also remember to put on the regular nuts before cutting the bolts and take them off afterwards. This will keep the threading from deforming when you put the lock nuts on.

For putting the finger together:
Put the beveled bolts on first.
Then the other bolts in any order.
Each bolt also gets its own washer and lock nut

For more detail: How to Build a Robotic Hand with Haptic Feedback using Arduino