Stuart and I wanted to design a project that would be a good introduction to upcycling electronics, robotics, arduino, art with maths/code. We came up with a drawing robot based on an old floppy drive.

We need to get at the insides, so take off the lid and have a look inside. We need to remove the loading tray which can often be lifted out when it’s in the eject position. Others have a latch or springs that need to be released. Have a look and work out what works for your drive!

Remove the top of the read/write head and put the screws back in so you don’t lose them!

Also, now is a good time to make the drive think that a floppy is loaded (otherwise it won’t spin up the platter). So use some bluetack or glue down one of the microswitches on the left hand side. You could also bypass one by removing one and soldering a wire between the contacts.

Keep hold of all the small screws and springs because they’ll be useful in other projects!

Step 2: Wire up the floppy

Control
Check the “floppy drive A pin out” table on this page . We’re interested in:
READ  Real-Time Arduino GPS Tracker with iPhone app

Note that all the odd pins are ground.

We also need to power the drive. I measured current draw and it peaked at 300mA. I did some research and it seems safe to power this from the 5v pin of the Arduino. USB has a maximum rating of 500mA for current draw and we’re safely within that limit.

If you have a floppy power cable then connect the Arduino ground to a black and Arduino 5v pin to the red cable. Otherwise you’ll need to work out which is pin 1 (it might be marked on the drive) and then use the table floppy power connector to know which pins to connect where; pin1: 5v, pin2 or 3: ground.

Turn on the power and check you get a light coming on somewhere at the front of the drive.

Step 3: Load up the software

The fun part of the project is coming up with different software to make different shapes, but here is something to get you started:

Load it into your arduino

Then compile and transfer to the arduino. The drive should spin up and the arm start moving if it’s all working!

Have a look at the code to see what’s going on – it’s pretty straight forward.

If it doesn’t work

Now that we’ve got the floppy drive under Arduino control, it’s time to add drawing functionality!

The platter is a bit too small and uneven to draw on, so we boosted its size with a DVD. You need to find something tubular, about 3cm diameter and 2cm high.

Put it in place and then check that the read/write arm can move fully in and out. If your tube is too big then you’ll have to remove part of the lower read/write head. We did this with the dremel’s grinding attachment.

You want everything as central and level as possible so it’s better to hold stuff in place and then glue it after. 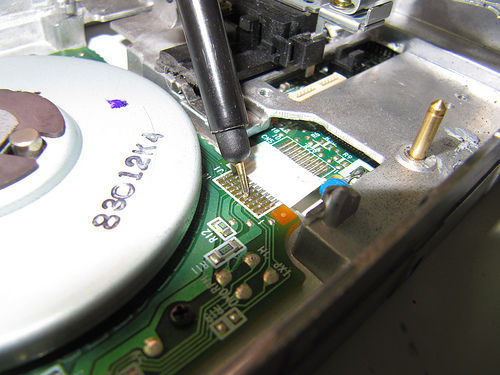 The read/write head’s travel is only about 1.5 cm long, so we added a lever to get greater pen movement.

We used the metal from the top of the floppy and a dremel with grinding attachment to cut out an arm. Look for a piece that has a hole for your pen to stick through. You might be able to avoid drilling a hole by being clever about your reuse!

Then we held it in place with a spindle and sprung loaded it with one of the floppy’s old springs.

Turn everything on and check that the pen can move a good distance over the radius of the DVD. You adjust things fairly easily just by bending the metal bits.

Cut some paper circles using another CD as a template. Then load up some paper (we used tiny scraps of masking tape to hold down the disks of paper), insert a pen into your pen holder and make it go!

Then start hacking the code and send us your best pictures!

The “universal gripper” developed by researchers from Cornell University, the University of Chicago, and iRobot inspired me to create my...