This project shows how to send SMS text messages to a cheap scrolling LED display via an Android app and arduino with USB host shield. 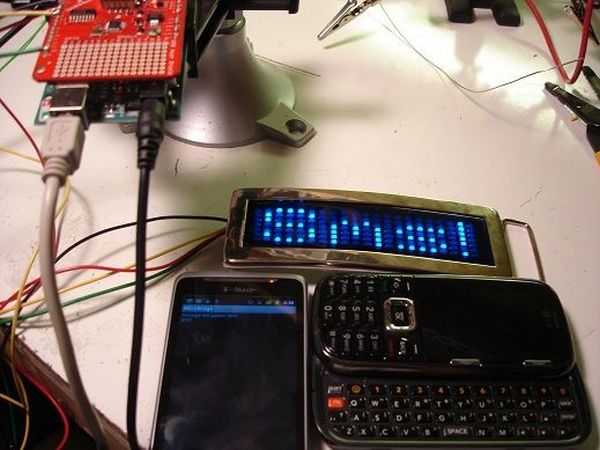 The project was originally inspired by a friend wanting to make a “sexting themed” costume, with a scrolling LED display of live texts sent from people at the party. We found a $13 LED belt buckle online, which looked cool, but only had a few buttons to manually enter in messages. A couple wires and lines of arduino code later, we were able to automate entry of messages.

We then added a host shield and wrote a small Android app to send txt messages on to the arduino.

—Demo arduino code for writing to the LED display and receiving SMS text messages via the USB connection, and Eclipse android project to pass SMS messages to arduino.

The display has three buttons that you use to change the messages. It’s a long process, since you have to scroll to each letter one click at a time, and there’s no speed-scroll. We pop open the case to see if we can easily attach wires to the buttons in order to automate message setting. 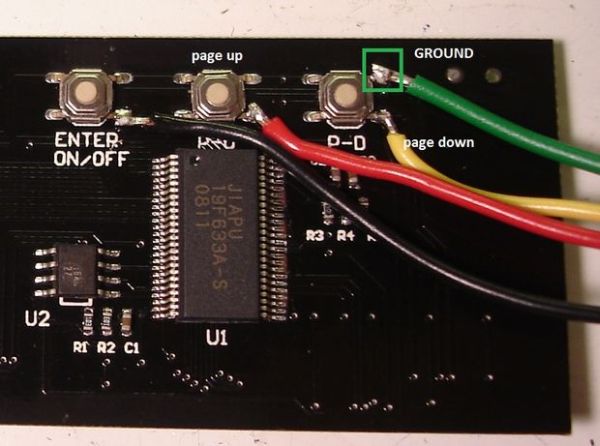 The three push button switches simply short the bottom side of the switch to ground when pressed. We’re going to simulate this action by switching the bottom side of the swtich between a high impedance pin (a digital input) and ground (a low digital out). This is easily done by switching the direction of the pin on an arduino, using pinMode(pin, INPUT) or pinMode(pin, OUTPUT). Just make sure the output is set Low before setting the pin to output (digitalWrite(pin,0)).

Four wires are attached, three for the switches, one for ground.