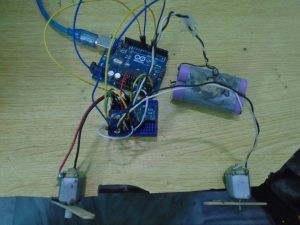 Before we begin our tutorial on controlling the motor speed, let’s see how to interface an accelerometer to Arduino.

First of all, make the connections of the L293D with the Arduino as follows

If you are using any Arduino other pins for making connections to the L293D motor driver, then ensure that you select PWM enabled pins.

After that, make the connections for the GY-521 module with the Arduino as follows

The structure of the accelerometer sensor has a mass attached to a spring which has fixed outer plates and moves along one direction. So when an acceleration is applied in any of the direction, the capacitance between the plates and the mass will change. The accelerometer sensor will measure this change in capacitance which corresponds to an acceleration value.