This instructable will construct a series of custom sensor modules and an Arduino shield. Such modules are available from many different sources, but fans of the Instructables website would probably find satisfaction in making their own. Each module will be a set size of 1.5cm by 2.5cm and employ a three pin connector of the form Signal-Voltage-Ground. The custom shield will break out the Arduino pins into the same Signal-Voltage-Ground configuration. Thus, electronic connections will be reduced to using a three pin cable to attach a sensor to its corresponding pin set on the Arduino shield. Uniformly spaced mounting holes at the corners of the modules will allow for interchangeable configurations on a robot deck or in other electronics projects. The embedded video displays the sensors in action on an autonomous obstacle avoiding robot. The Arduino code for the robot is given below. The light sensors described in step three of this instructable were also used in my previous instructable.

The construction of the sensors will involve some basic materials including several perf boards, header strips, socket strips and three pin cables. Both straight and right angle headers will be used. The perf boards need to be cut into several 1.5cm by 2.5cm rectangles with a screw hole drilled into each corner. (See figures in the following steps.) In the following steps, an image note in the upper left will give each figure a number of the form Figure x-x. For example, Figure 2-4 refers to the fourth figure of step two.

The leaf switches are designed to be used as contact sensors on the sides of a robot. Thus they will be constructed as mirror image pairs, one for the left side and one for the right side of the robot. Placement of the components for the left leaf switch are shown on the left in Figure 1-2. I hot glued the three pin connector into place, but I used nuts and bolts to secure the switch itself to the sensor platform for greater stability. Solder a white wire from normally open contact on the switch to the signal pin of the sensor. See figure 1-3. (Note, for all of the sensors in this instructable, when the three pin connector is positioned on the sensor platform and pointing down, the pin order from left to right is Signal, Voltage, Ground. Of course when viewing the back side of the sensor, the order from left to right is Ground, Voltage, Signal.) Next, solder a white wire from the signal pin to one lead of the 10K resistor. Solder a black wire from other end of the 10K resistor to the ground pin. Finally, solder a red wire from the common contact of the switch to the voltage pin. The resistor pulls the signal pin low. Pressing the switch then pulls the signal pin high.

Hot glue the components into place as shown on the left of Figure 2-2. On the back side of the sensor, bend the resistor leads toward the outer pins of the three pin connector and solder. Solder a white wire from the signal pin to one side of the switch. Solder a red wire from the voltage pin to the other side of the switch. Don’t forget to solder all four switch leads for stability. (I originally only soldered the two leads connected to the wires and the button began to rock back and forth.)

The directions given here will closely mirror those of my previous instructable. Each light sensor will consist of a voltage divider made from a photoresistor and a 250K potentiometer. First, hot glue the components into place as shown in Figure 3-2. Bend the leads of the potentiometer as show in Figure 3-4. Take a white wire and solder the right most connector pin (as viewed from the back) to the potentiometer wiper and right socket lead. Use a red wire to solder the left socket lead to the right potentiometer lead and the center connector pin. Use a black wire to solder the remaining potentiometer lead to the remaining connector pin. Next, place some shrink tubing around the legs of the photoresistors before inserting them into the sockets. See Figure 3-5. This gives the sensor a nice finished look and of course also prevents shorts. (I picked up this shrink tube tip from BIGDOG1971‘s light following robot instructable.) These voltage dividers can also be used with other sensors such as flex sensors and force sensors.

For this module I simply hot glued the IR sensor to the sensor platform. 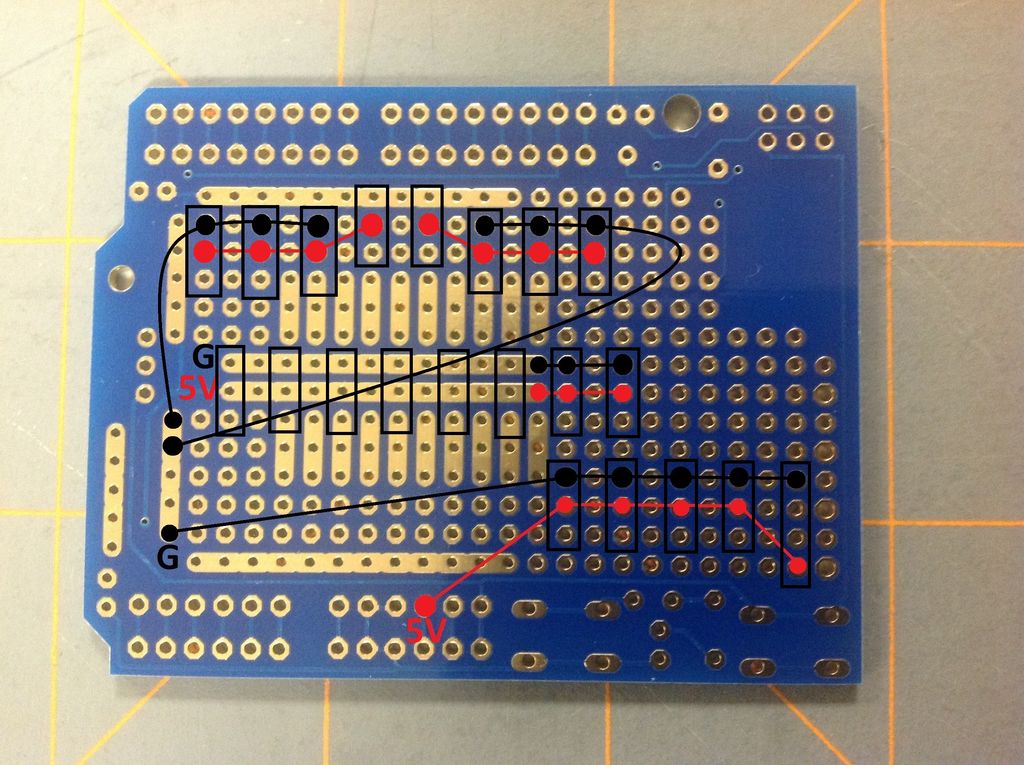 Again, this module consists of the the sensor hot glued to the sensor platform. You may want to use a small piece of wood or cardboard under the “eyes” of the sensor since it does not quite fit on the platform. Also, the HC-SR04 sensor that I used does not conform to the three pin configuration of the other sensors. This requires a dedicated four pin node on the Arduino shield as described in Step 10.