This mechanical bull was created as a weekend hobby. The creation process was simple and did not last more than two hours. The materials I already had at home. For those who wish to make an equal, will be a good opportunity to recycle materials and learn how to use the joystick shield with Arduino. Hope you enjoy.

– A volunteer (doll)
– Pieces of cardboard
– An empty soft drink
– Two servomotors
– A Arduino Uno
– A Joystic Shield
– Arms for the servants
– Three screws
– nuts and a washers
– Hot glue, scissors, knife, etc. …
I used a can of soda as a model for the doll bull riding. After that, I drew on the cardboard, cut out the template and glued using hot glue.

The servo motors are fixed on each other as shown, using a piece of cardboard to position them correctly and hot glue.

Joining small pieces of cardboard with a hole in the center, was made a bracket to hold the mount in servants. 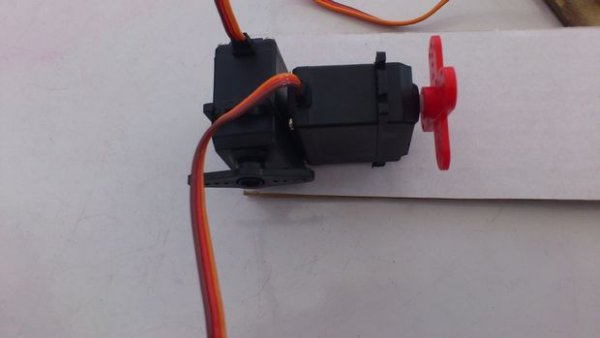 I used a bolt, a nut and washer to secure the mount in servants, according to the figure.
Also used a piece to make the linking of movement between the servo arm and mount. This part should be a little slack for not hang with the movements.

The base was made ​​with a simple cardboard cutout. I made the design of servo arm that controls the base, cut out and pasted it on cardboard with hot glue.
I used a part of the soda can as a handle to hold the puppets up on it.

Overview: This instructable will construct a series of custom sensor modules and an Arduino shield. Such modules are available from...