John has been working to recover components from old power supplies and available trash electronics, in order to build controllers to power stepper motors and other mechanisms for the FabLab. 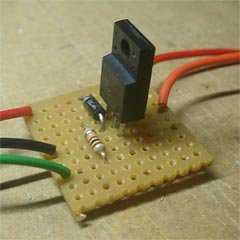 The Arduino microcontroller board is able to supply a current of 40mA from its output connections. These digital outputs are fixed at 5V “ON” or 0V “OFF”. This is adequate for working with LEDs but devices such as motors, solenoids, high brightness LEDs etc. may require much higher currents and voltages. To achieve this an interface in between the Arduino and the device can be made from locally sourced components.

Suitable transistors can be found in a wide variety of waste electronic items. Internet resources are available to check part numbers for a components specification and, interestingly, retail price. In the following example all the components were found in a discarded ATX computer power supply.

This simple circuit can be quickly built on a breadboard or, for permanent use, on stripboard.

The circuit can also be used with other inductive loads, such as solenoids and relays. For other, non-inductive, loads (LEDs etc.) the protection diode D1 can be omitted. In this example the ATX components used were: 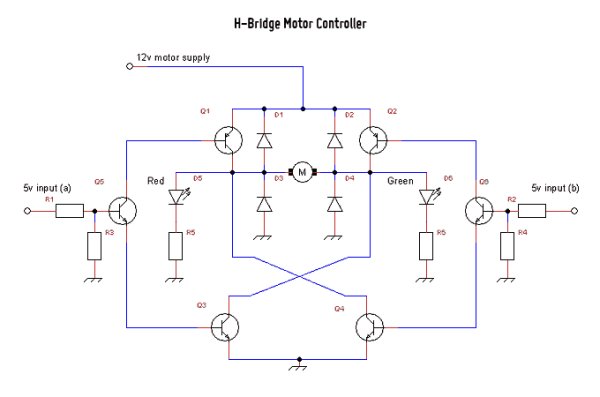 This circuit has been initially tested with 12V motors drawing 500mA without a heatsink. This is more than adequate for initial experiments in the FabLab, though it may be worth noting that the transistor is rated at 400V and 3A.

The H-bridge circuit enables a motor to be spun in either direction and stopped from two control inputs. A steerable robot can be made using this circuit, together with a second circuit and DC motor.

For more detail: Controllers and Sensors