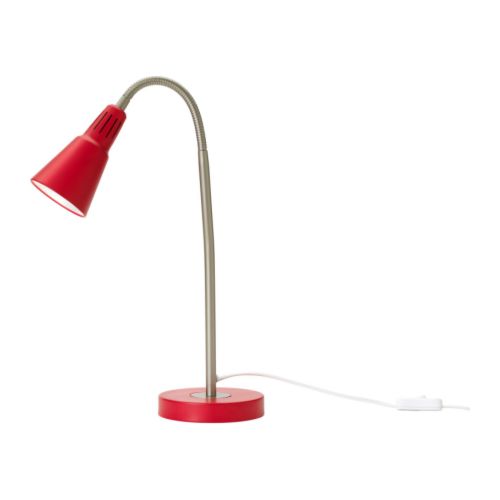 Once again the electronics of the clock will be based from an Arduino-compatible board with a DS1307 real-time clock IC added to the board. On top of this we add a shield with some extra circuitry and two buttons – but more on this later. The inspiration for this clock came from a product that was recently acquired at Ikea – the “Kvart” work lamp, for example:

The goal is to place the electronics of the clock in the base, and have one single-digit LED display at the top of the neck which will blink out the digits. There will be two buttons under the base that are used to set the time. It will be powered by a 9V battery or an AC adaptor which is suitable for a typical Arduino board.

This article is a diary of my construction, and you can always use your own knowledge and initiative. It is assumed that you have a solid knowledge of the basics of the Arduino system.  If not, review my series of tutorials available from here. Furthermore, feel free to modify the design to work with what you have available – I hope this article can be of some inspiration to you.

It is much easier to prototype the clock and get the Arduino sketch working how you like it before breaking down the lamp and building up the clock. To do this involves some jumper wires and a solderless breadboard, for example:

Although there are four buttons on the board we only use two. They are connected to digital pins eight and nine (with 10k pull-down resistors). The LED display segments a~g are connected to Arduino digital pins 0~6 respectively. The decimal point is connected to the pulse output pin of the DS1307 – which will be set to a 1Hz output to have a nice constant blinking to show the clock is alive and well.

If you are unfamiliar with operating the DS1307 real-time clock IC please review this tutorial. Operation of the clock has been made as simple for the user as possible. To set the time, they press button A (on digital eight) while the current time is being displayed, after which point the user can select the first digit (0~2) of the time by pressing button A. Then they press button B (on digital nine) to lock it in and move to the second digit (0~9) which is again chosen with button A and selected with button B. Then they move onto the digits in the same manner. 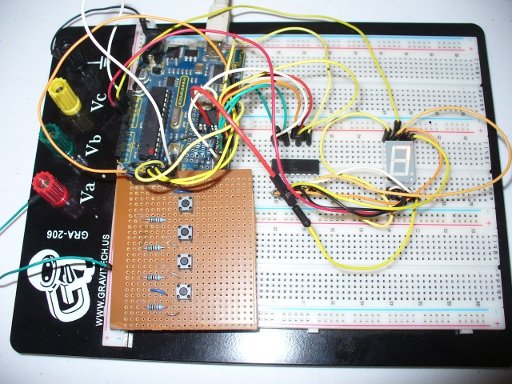 After this process the new time is checked for validity (so the user cannot enter invalid times such as 2534h) – and is ok, the clock will blink the hyphen twice and then carry on with the new time. If the entered time is invalid, the clock reverts back to the current time. This process is demonstrated in the following video clip:

Project Code and other data: