Bluetooth Basics: How to Control an LED Using a SmartPhone and Arduino

Ever thought of controlling any of your electronic devices with your smart phone? How about a robot or any other device? Wouldn’t it be cool to control them with your smartphone? Here is a simple tutorial for interfacing an Android Smartphone with Arduino via Bluetooth!

Android studio isn’t really required here since I will provide you with the android application that I made. You can install the given .apk file to use the application. 🙂

There are three main parts to this project. An Android smartphone, a Bluetooth transceiver, and an Arduino. 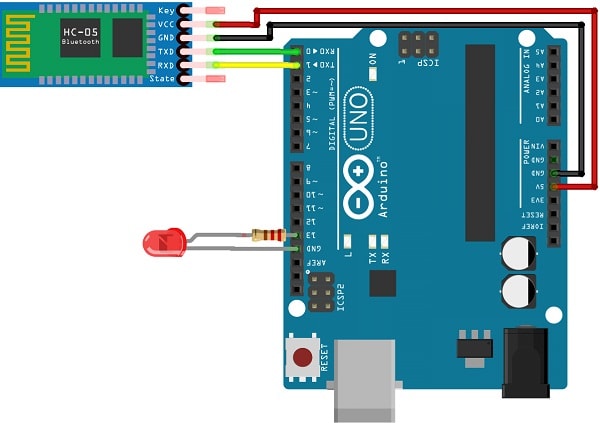 This circuit is simple and small. There are only four connections to be made between the Arduino and Bluetooth module!!

Connect a LED positive to pin 13 of the Arduino through a resistance (valued between 220Ω – 1KΩ). Connect its negative to GND, and you’re done with the circuit!

Read More:  How to Control an LED Using a SmartPhone and Arduino

The device - which features a programmable array of red LED lights - includes two buttons and a built-in motion...