I bought a solar powered garden light. The solar panel charges the batteries and when it gets dark the lights (3x LEDs) turn on until it either gets lights again or the batteries run out.

It has a small amount of intelligence (turns on when dark off when light) but not enough! Time for some upgrades. 😀 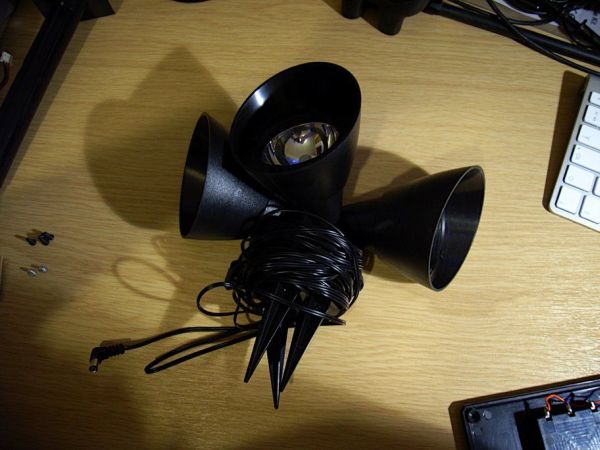 First, the batteries. The control box houses the batteries, which are three Ni-MH AA cells. They are 600mAh. (That’s not a typo – six hundred). I swapped them out for three 1500mAh Ni-MH cells that I don’t use anymore (because they are only 1500mAh).

Then I reverse engineered the circuit diagram for the electronics (nothing special there, two transistors, two resistors a switch and a diode).

I have a few ideas for sensors and transducers I want to add to the light, but I’ll start by adding a microcontroller. Step forward the Arduino Wee made by SparkFun Electronics.

When light is falling on the solar cell, transistor Q1 is turned on and connects the base of transistor Q2 to ground. This isolates the output of Q2 keeping the LED spotlights turned off. When it gets dark, Q1 is turned off, leaving the emitter isolated (floating). Assuming SW1 is turned on, the base of Q2 will be high due to R2. This will turn Q2 on and connect the emitter to ground. This completes the circuit for the LED spotlights and they turn on. 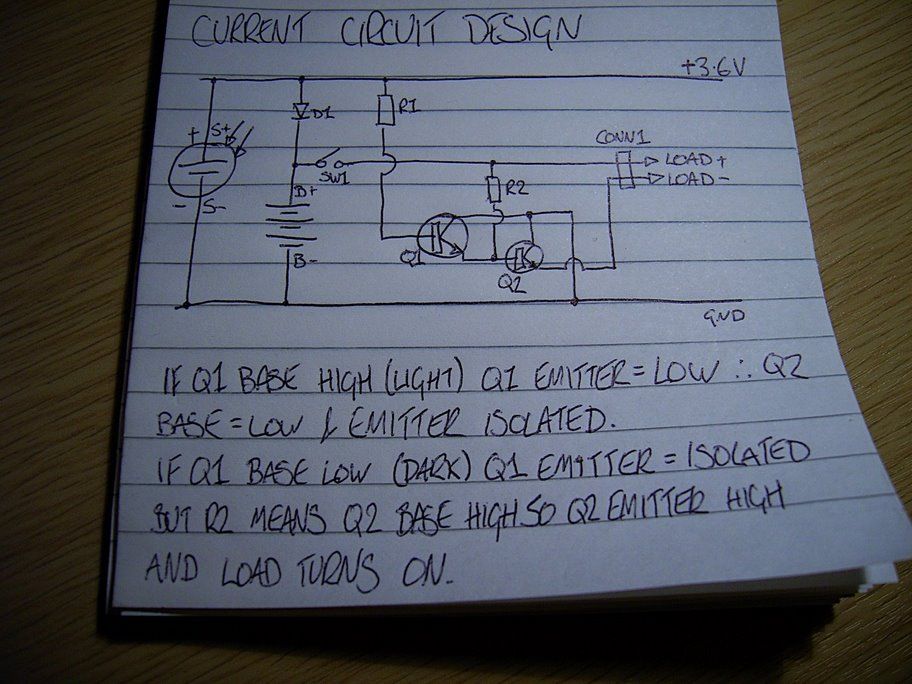 So, the Arduino Wee is a 3.3V device (the normal Arduino is 5V TTL). The battery is made of 3x 1.2V cells giving 3.6V total. The Wee can cope with the extra 0.3V. I connected the Wee to the positive power rail after the switch and to the negative rail on the battery compartment. Then I unsoldered R1 and connected digital pin 3 to the base of transistor Q1, and the analogue input A0 to the positive rail of the solar panel. The Wee can now control the LED spotlights and knows if it’s light or dark.

As there’s intelligence in the solar garden light now, why just turn the lights on immediately when it gets dark? That’s not very sophisticated is it? Slowly turning the light on and getting brighter until it’s fully on, looks sooooo much better. 🙂

That’s why I used pin 3 – a PWM pin. 😉 You can see on the ‘scope the pulses. It’s showing about a 50:50 mark space ratio, so the light is at 50% brightness. It takes about two seconds to go from fully off to fully on. I think it looks cool.

The Arduino Yún is a curious addition to the Arduino family. There is a fairly widespread community surrounding the Arduino...