This is a very odd kind of clock, which can easily be made with simple supplies.
To begin the explanation, I would like to say that I have always wanted time to be metric. 5 o’clock would be mid-day, 7:5 would be three quarters (6:00 pm), and so on. This prototype tells deci-days, centi-days, and milli-days, in that order. For those that are unfamiliar, ten deci-days are in a day, ten centi-days are in a deci-day, and ten milli-days are in a centi-day. For comparison, a milli-day is 86.4 seconds.
With my limited supplies, I had to make it read in binary, but that’s alright with me!

A note:
I am a beginner at Arduino. And a beginner at instructables. So at times it may not be perfect, and I hope you have some understanding! 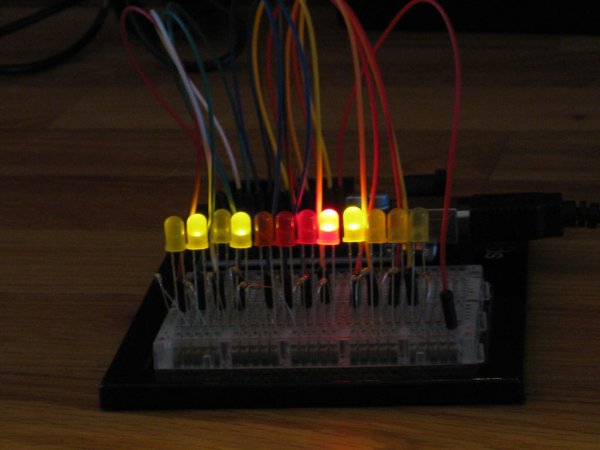 The set up is pretty easy. If you take a look at the picture (created using Fritzing), the blue lines are wires, red things are leds, and the resistors are 330 ohm resistors. It is remotely self-explanatory.

The complete code is available as binarymetricclock.ino. I will now proceed to explain the code:

These are the variables that keep track of the time. 0, 0, 0, 0 means midnight. These should be set to the time when you upload the code, or power it on for the first time.

This code is fairly self explanatory. I could have used a loop or something, but I chose not to.