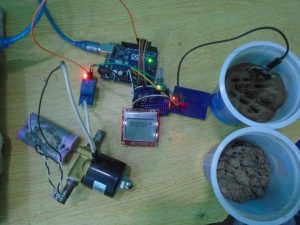 Before we proceed, let’s take a look at another project – a plant watering system using Arduino, which is very similar to our application. You may also read our other tutorials on – interfacing Nokia LCD to Arduino and our tutorial on interfacing Soil Moisture Sensor to Arduino.

Nokia 5110 LCD operates on 3.3V, and if we connect it directly to the data pins of Arduino the life time of Nokia 5110 LCD will decrease (notice that the LCD will still work even if you connect directly without current limiting resistors). So, if you want to use it for a longer span, it’s good to connect via resistors as we have shown in this project.

The potentiometer used here is for increasing or decreasing the backlight contrast of LCD. If you want full back light, then you can connect it directly to 5V or if you want no backlight, then connect it to ground.

After that, connect the relay module with the Arduino as follows

In last, connect the FC-28 soil moisture sensor to the Arduino as follows

The soil moisture sensor senses the moisture present in the soil and gives the output to Arduino. The output of the sensor will be from 0-1023. The moisture is measured in percentage; therefore we should map these values to 0-100. 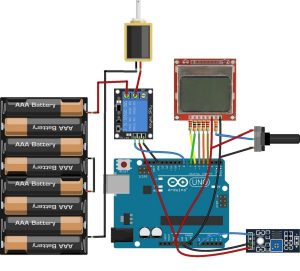